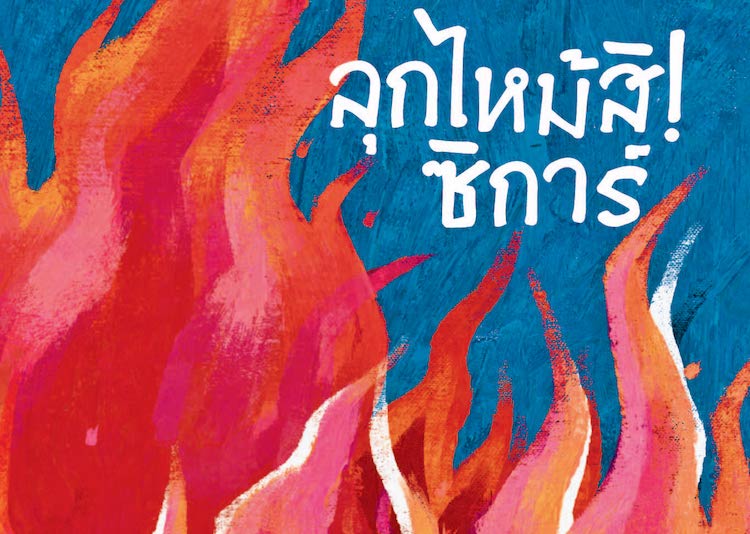 ลุกไหม้สิ! ซิการ์ (‘burning cigar!’), a short collection of poems written anonymously by ‘Chatchon’ in 2010 and 2020, offers a literary commentary on Thailand’s political protests. The bulk of the poems are reflections on the red-shirt rallies that culminated in the May 2010 military massacre. Uneducated People! highlights the condescension aimed at the pro-democracy movement by the rival yellow-shirts. ความสงสัย (‘doubtfulness’) addresses the killing of protesters on 10th April 2010 (an event also memorialised by Tawan Wattuya’s Amnesia and Parinot Kunakornwong’s 10th April). เด็กหนุ่มในบทกวี (‘the boy in the poem’) is a remembrance of the final week of the 2010 massacre (as was Pisitakun Kuantalaeng’s installation Ten Year: Thai Military Crackdown [sic]).

Similarly, the poems written in 2020 address the student-led protest groups that have formed over the last two years. One poem is dedicated to Arnon Nampa, one of the protest leaders, who is himself a poet. Another is titled เก่งมาก กล้ามาก ขอบใจ (‘very good, very brave, thank you’), clearly evoking a comment made by the King to one of his supporters during a walkabout on 23rd October 2020—“กล้ามาก เก่งมาก ขอบใจ” (‘very brave, very good, thank you’)—which is also the title of a song by Paeng Surachet. This poem also quotes the protest chant “1 2 3 4 5 I Hear Too”, a pun on the Bottom Blues single 12345 I Love You. (“I Hear Too” is a homophone for ‘ai hia Tu’, an insult directed at Prayut Chan-o-cha.)
Categories: books, politics