“Do you hear the people sing?” 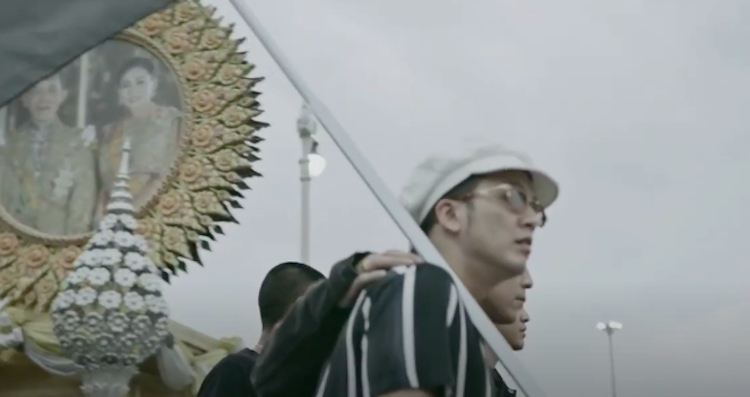 In 2018, Rap Against Dictatorship’s single My Country Has (ประเทศกูมี) encapsulated the frustrations of anti-coup protesters. In 2020, when the protests expanded to include calls for reform of the monarchy, the band released Reform (ปฏิรูป), a song whose lyrics address Prayut Chan-o-cha and King Rama X directly. (Lines such as “pawns have a king captured” in the song’s official English translation are even more blunt than the Thai original.)

The video for Reform—blocked by the government on YouTube—was filmed at Siam Square in Bangkok on 16th October 2020, and includes footage of riot police using water cannon to disperse the protesters. The music video for Elevenfinger’s เผด็จกวยหัวคาน (‘get rid of the dickhead’) was also filmed during the protests, and is even more confrontational than Reform. Elevenfinger hurls insults at Prayut and others, and lyrics such as “ละควรรีบๆตาย” (‘hurry up and die’) are as subtle as a brick through a window, as are lines such as “Daddy can go fuck himself” in Paradigm’s single พ่อมึงสิ (‘your daddy’).

The lyrics of another recent song are addressed directly to Rama X: Paeng Surachet’s กล้ามาก เก่งมาก ขอบใจ (‘very brave, very good, thank you’). Its title is an ironic appropriation of a comment made by the King to one of his supporters during a walkabout on 23rd October 2020, and its lyric video features animated yellow ducks in reference to the inflatable ducks used by protesters to protect themselves from water cannon.

Paeng’s song takes the form of a breakup message to an unfaithful lover, with lines such as “ประนีประนอมได้ไหม ไม่ compromise นะถ้าทำตัวเเบบนี้” (‘Can we compromise? No, I won’t compromise if you behave this way’). ‘Compromise’ is a reference to a comment by the King on another walkabout: on 2nd November 2020, he told a reporter that “Thailand is the land of compromise.” Paeng later released a music video for the song, featuring protest leaders Panusaya Sithjirawattanakul and Parit Chirawak in angel costumes.

Panusaya and Parit also performed guest vocals on a new version of The Commoner’s track Commoner’s Anthem (บทเพลงของสามัญชน), released last month with a music video featuring footage of pro-democracy protests. (Parit was recently hospitalised after going on hunger strike for forty-six days, and was released on bail on 11th May; Panusaya was bailed on 6th May.) The Commoner’s video คนที่คุณก็รู้ว่าใคร (‘you know who’) also features protest footage, and Parit and Panusaya are name-checked in the lyrics of Hockhacker’s song Pirates (โจรสลัด).

Protesters have also reappropriated existing songs. Do You Hear the People Sing? (from the stage musical Les Misérables) was sung at several of last year’s protests in place of the national anthem. Chaiamorn Kaewwiboonpan performed his hit single 12345 I Love You at a protest near Bangkok’s Democracy Monument on 14th November 2020, leading the crowd in chants of “ai hia Tu” instead of “I love you” during the chorus. (Ai hia is a strong insult, and Tu is Prayut’s nickname.) Chaiamorn was released on bail on 11th May, after burning a portrait of Rama X outside Bangkok’s Klongprem prison on 28th February.

Chaiamorn also performed 12345 I Love You outside Thanyaburi Provincial Court on 14th January, with Phromsorn Weerathamjaree, leading to lèse-majesté charges being filed against both of them. Whereas Chaiamorn usually sang Prayut’s nickname during the chorus, at Thanyaburi they used a nickname for the King instead. Phromsorn was also charged with lèse-majesté for singing three traditional royalist songs at the same event—สดุดีมหาราชา (‘praise the King’), ต้นไม้ของพ่อ (‘father’s tree’), and ในหลวงของแผ่นดิน (‘the king of the land’)—which he performed with altered lyrics.

“Ai hia Tu” also appears in the lyrics of Rap Against Dictatorship’s latest single, Ta Lu Fah (ทะลุฟ้า), and another line—“Burn this image”—is also a reference to Chaiamorn. The ‘sky’ in the title is metaphorical, and the lyrics refer indirectly to “someone in the sky. Fuck knows he’s alive.” (This is a reference to a recent rumour that went viral online.) The music video, directed by Teeraphan Ngowjeenanan, includes footage of recent REDEM protests, which also feature in the lyrics (“Gunshots from the police as REDEM marches in line”).
Categories: music, politics