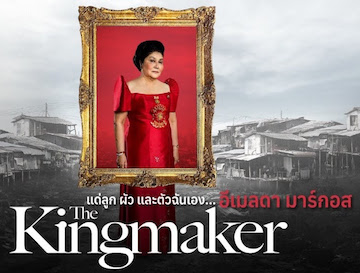 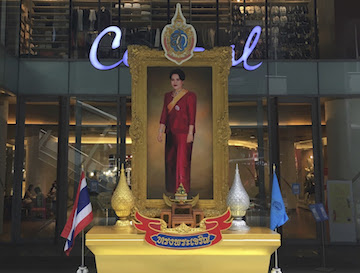 Two screenings of the American documentary film The Kingmaker, about the life of Imelda Marcos, have been cancelled in southern Thailand after pressure from local authorities. The film was due to be shown on 14th August at the AEY Space gallery in Songkla, and on 19th August at Lorem Ipsum, a co-working space in Hat Yai. Both are small venues, with seating capacities of only thirty and twenty people, respectively.

Contrary to reports in the Bangkok Post newspaper and elsewhere, the film (directed by Lauren Greenfield and released last year) has not been banned in Thailand. In fact, it was passed uncut by the censors, and is currently showing at cinemas in Bangkok without incident. The ‘ban’ is similar to that of By the Time It Gets Dark (ดาวคะนอง) and Boundary (ฟ้าต่ำแผ่นดินสูง), both of which were also subject to arbitrary local censorship: a Bangkok screening of By the Time It Gets Dark was stopped by police in 2017, and the military government prevented a Chonburi university screening of Boundary in 2015.

In the case of The Kingmaker, the authorities’ overzealous attitude highlights the state’s unease over recent anti-government protests. Several thousand students attended a rally at Bangkok’s Democracy Monument on 18th July organised by Free Youth. More than 10,000 people rallied there yesterday, and a smaller protest (with a Harry Potter and Voldemort theme) took place on 3rd August. At a Thammasat University protest on 10th August organised by United Front of Thammasat and Demonstration, student Panusaya Sithijirawattanakul read out a ten-point manifesto calling for greater oversight of the monarchy.

This unprecedented public questioning of the monarchy’s role broke a long-standing taboo in Thai society, leading the authorities to clamp down on potentially inflammatory material, in this case The Kingmaker’s title and poster. The screenings were scheduled for a few days after Thai Mother’s Day (12th August), which is celebrated on Queen Sirikit the Queen Mother’s birthday, and the poster does bear some similarities to one of her official portraits. These are mere coincidences, however, and the authorities’ paranoid reaction has turned what would have been a tiny event into an international headline.
Categories: censorship, films, politics
Dateline Bangkok