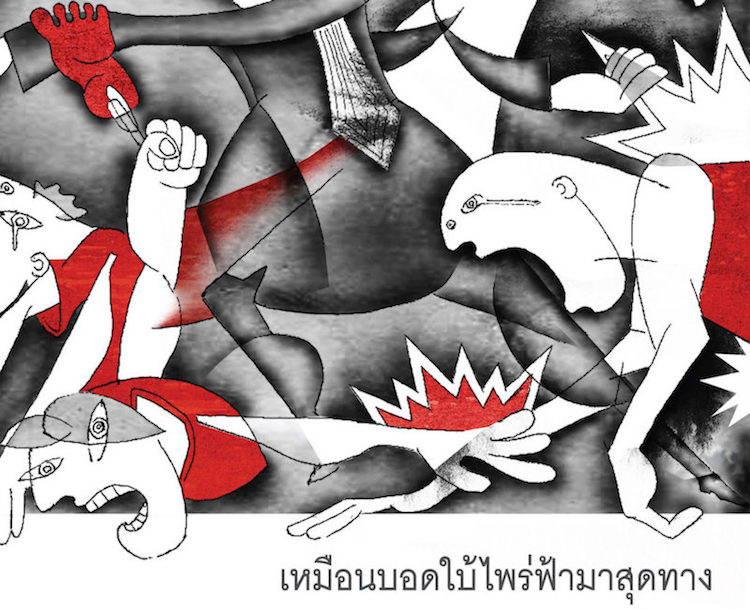 Human rights lawyer Arnon Nampa was the first anti-government protester to call for reform of the monarchy, at a rally in 2020. He was arrested earlier this month, following a speech marking the first anniversary of that event. His portrait was painted by Witawat Tongkeaw, who dubbed him Captain Justice (ทนายอานนท์).

Arnon published a booklet outlining his proposals for a truly constitutional monarchy, สถาบันพระมหากษัตริย์กับสังคมไทย, and he cowrote a booklet with a manifesto for monarchy reform, ปรากฏการณ์สะท้านฟ้า 10 สิงหา. They have recently been translated into English by PEN International online, as The Monarchy and Thai Society and The Day the Sky Trembled, respectively.

Arnon’s first book, however, was a poetry collection published in 2011. One poem, เหมือนบอดใบ้ไพร่ฟ้ามาสุดทาง (‘we subjects, as if mute and blind, have found ourselves at the end of the line’) also provided the title of the collection. It describes the legal persecution that followed the 2010 Ratchaprasong massacre, when red-shirt activists were charged with arson.

Arnon defended many of the accused, and the poem highlights the injustice of their trials. It concludes with a call to arms, which was eventually answered last year when the student-led anti-government protests began in earnest:

“So the law has turned to the rule of dogs;
We subjects, as if mute and blind,
Have found ourselves at the end of the line:
Submit or die—no other way.

History must be written in lives
To get the wheel of time unstuck;
Fly the red flag, friends, show your pluck:
Revolt! Bring down the robber regime!”

The book’s cover, by Kullawat Kanjanasoontree, reimagines Picasso’s Guernica as a depiction of the 2010 massacre. It was included in the Art for Freedom (ศิลปะเพื่อเสรีภาพ) exhibition at the Pridi Banomyong Institute in 2013, under the same title as the book and with an alternate English translation, As Blind as the Dead End. The Sanam Ratsadon website features two poems from the collection, newly translated by Peera Songkünnatham.
Categories: books, politics
Dateline Bangkok