The new Jim Thompson Art Center opened in Bangkok last year, and its inaugural exhibition, Future Tense: Imagining the Unknown Future, Contemplating the Cold War Past, explores the legacy of the Cold War era in contemporary Southeast Asia. The exhibition opened on 27th November 2021, and runs until 28th February.

Future Tense includes Parinot Kunakornwong’s installation 10th April (๑๐ เมษายน), which examines the military massacre of red-shirt protesters on 10th April 2010. In a corner of the gallery is The Men in Black, a group of polystyrene mannequin heads in balaclavas representing the armed agitators who infiltrated the 2010 protests. (A powerful photograph of a ‘man in black’ was one of five images by Agnes Dherbeys censored from a BACC exhibition about the protests in 2010.) 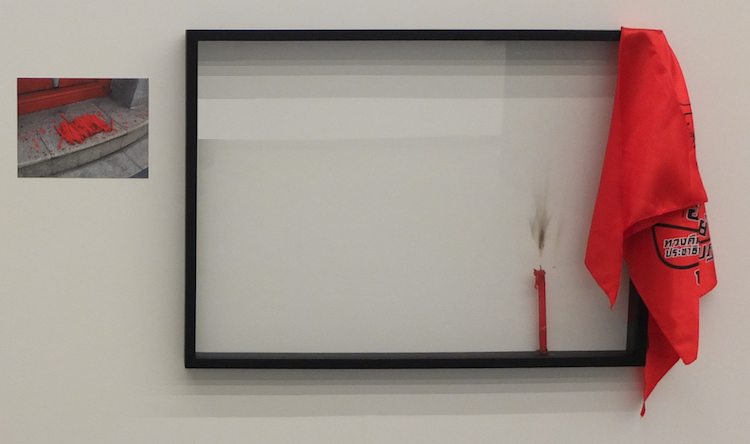 Parinot attended a commemoration at Democracy Monument on the anniversary of the massacre last year. (His installation includes To Service, a candle and red-shirt scarf from the event.) He wiped a wet towel around the monument and collected soil samples from the area: traces from the site of the massacre, the residue of history. These were then photographed with a scanning electron microscope, to produce abstract images (The Cleaner, Banner, and O) exhibited alongside the physical artefacts themselves (Towel and Samples). The process is a combination of art and science, ritual and remembrance.

The shootings on 10th April 2010 were the prelude to a military crackdown resulting in the loss of almost 100 lives. Tawan Wattuya painted portraits of the victims for his Red Faces series, shown at the Khonkaen Manifesto (ขอนแก่น แมนิเฟสโต้) and Amnesia exhibitions in 2019. A book commemorating the victims, วีรชน 10 เมษา คนที่ตายมีใบหน้าคนที่ถูกฆ่ามีชีวิต (‘heroes of 10th April: the faces of the dead live on’), was published in 2011.
Categories: art, politics
Dateline Bangkok