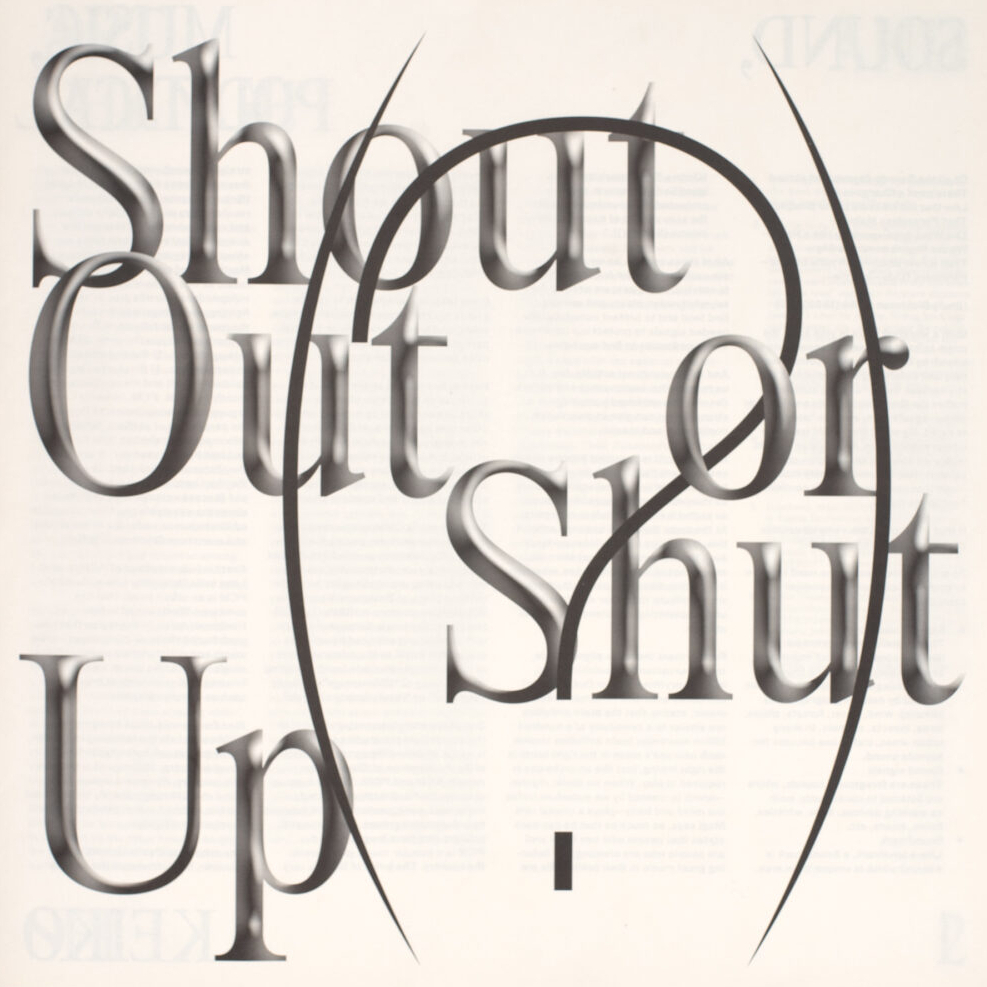 Shout Out or Shut Up (?), edited by art critic and curator Judha Su, was published by Bangkok CityCity Gallery in 2017. It has the same dimensions as an LP sleeve, and is limited to 300 copies.

The booklet features the first English translation of lyrics by Thai rappers P9d and Liberate P, who Judha describes as “the poets for our generation”. Both artists have released singles criticising the military government, and Liberate P is a member of Rap Against Dictatorship. (The booklet misnames his song Oc(t)ygen as “OCT(Y)GEN”.)
Categories: book reviews, politics, Thailand

Give Us a Little More Time 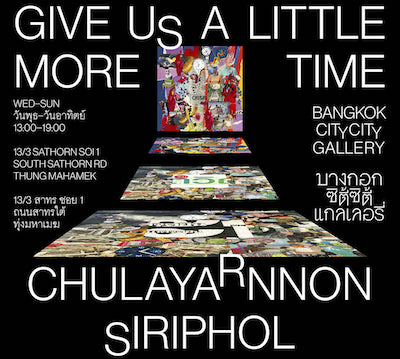 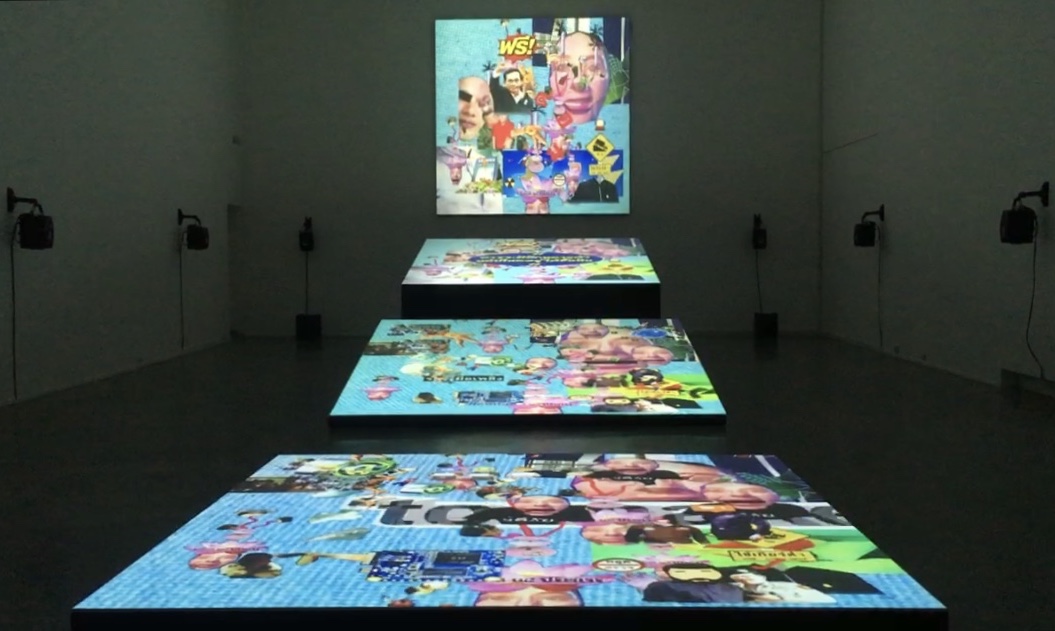 Chulayarnnon Siriphol’s exhibition Give Us a Little More Time (ขอเวลาอีกไม่นาน) opened today at Bangkok CityCity Gallery. Every day from the 2014 coup until the 2019 election, Chulayarnnon created a different A4 collage from Thai newspaper clippings. There are more than 1,000 of these satirical collages, collected in a six-volume catalogue, and ten of them are on show at the exhibition as enlarged reproductions.

The main gallery space is occupied by a four-screen video installation, showing a twelve-minute montage of overlapping newspaper headlines and photos. This rapid-fire video collage remixes and distills six years of mainstream press coverage of the military government.

The exhibition’s ironic title is a line from a propaganda song released by the junta, Returning Happiness to the Thai Kingdom (คืนความสุขให้ประเทศไทย), part of which is sampled on the video soundtrack. Arnont Nongyao’s video Ghost Rabbit and the Casket Sales (กระต่ายผี กับ คนขายโลง) also samples the song, as does Thunska Pansittivorakul’s documentary Homogeneous, Empty Time (สุญกาล).

Chulayarnnon’s recent film 100 Times Reproduction of Democracy (การผลิตซ้ำประชาธิปไตยให้กลายเป็นของแท้) is another post-coup political critique, and will be shown at CityCity on 9th August, when the exhibition closes. (Give Us a Little More Time was originally scheduled for 25th April to 21st June, though the opening was delayed due to the coronavirus pandemic.)
Categories: art exhibitions, politics, Prayut Chan-o-cha, Thailand 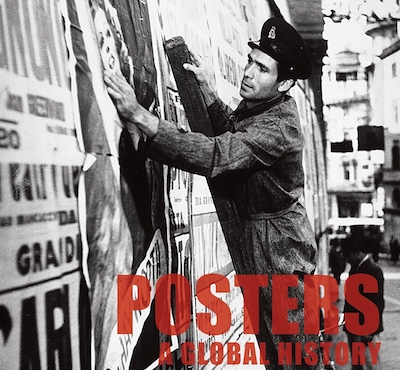 Posters: A Global History, by Elizabeth E. Guffey, was published in 2015. The book lives up to its ambitious subtitle, offering a worldwide survey of poster art from the Industrial Revolution to the present. Guffey’s scope extends beyond design and aesthetics, to consider posters as physical objects within the urban environment, “not in textbooks or museums but in the alleys of Ramallah, the barber shops of Lagos and the market stalls of Chennai.”

The last comprehensive book on the subject, The Poster by Alain Weill, was published more than thirty years ago. Weill covered Chinese and Japanese posters in addition to more familiar Western examples, though Guffey’s book breaks new ground with coverage of posters from India, Africa, and the Middle East. Posters features only 100 colour illustrations, though these are supplemented by vintage photographs, historical newspaper cartoons, and other ephemera.

Once Upon a Time in the West:
Shooting a Masterpiece 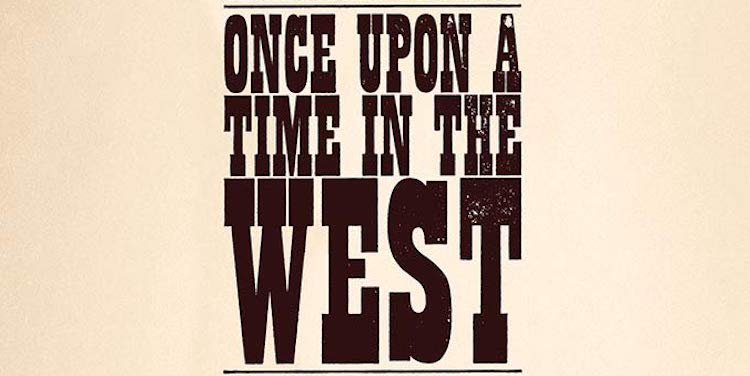 Once Upon a Time in the West: Shooting a Masterpiece, by Christopher Frayling, is a definitive monograph on Sergio Leone’s epic Western. The book includes interviews with Leone and his collaborators, a day-by-day production history, and numerous previously-unpublished images.

Frayling is one of our greatest cultural historians, and the world’s leading expert on Leone. His Something to Do with Death is a comprehensive biography of the director, and Spaghetti Westerns and Once Upon a Time in Italy are essential guides to the Spaghetti Western. Once Upon a Time in the West: Shooting a Masterpiece is Frayling’s third book for Reel Art Press, the others being Frankenstein and The 2001 File.
Categories: book reviews

The Art of Earth Architecture 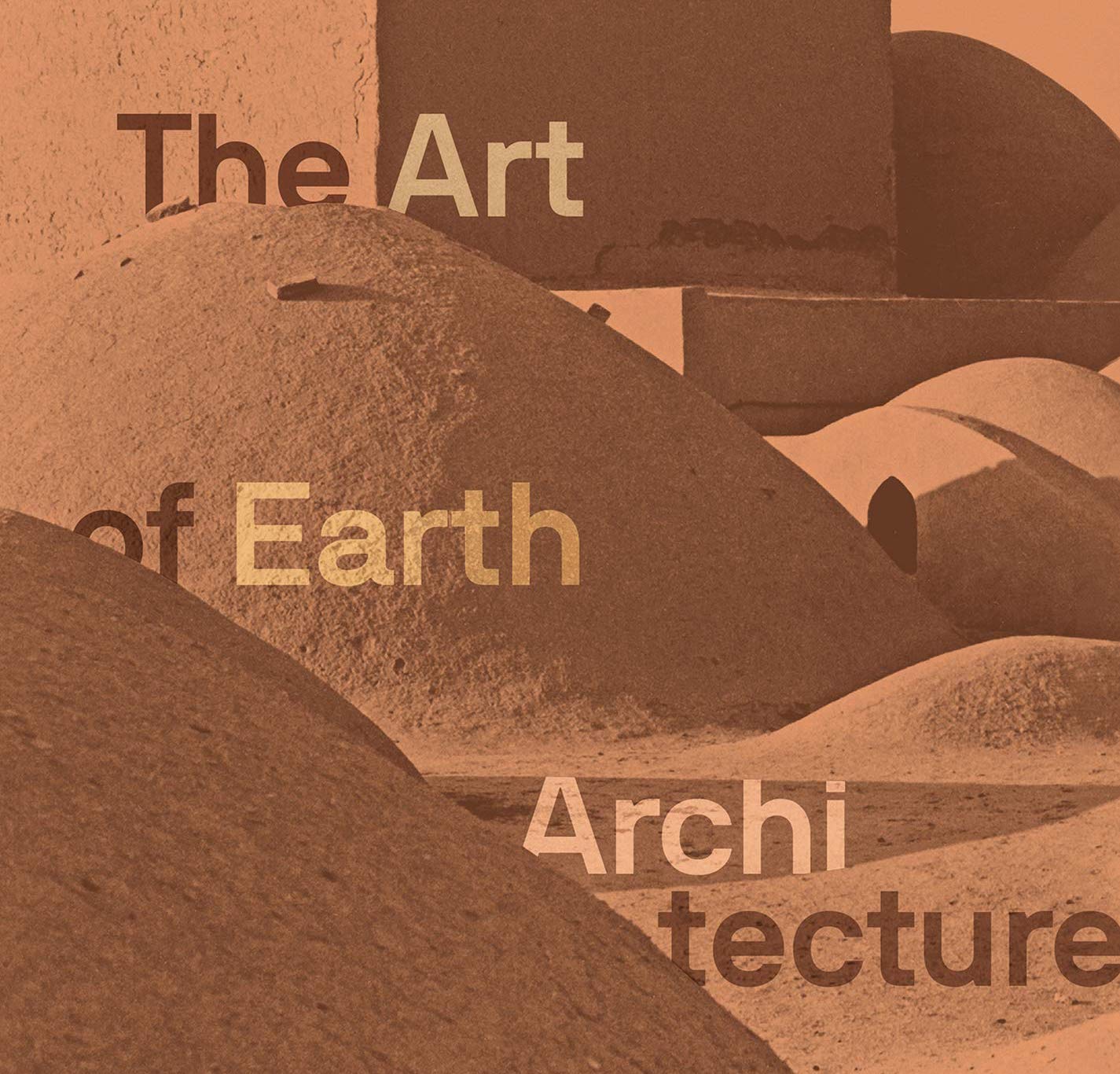 The Art of Earth Architecture, by Jean Dethier, is a comprehensive guide to “the history of architecture, settlements, and structures built from earth.” Technical aspects are covered in the first chapter, while other sections give a chronological account of raw earth architecture from antiquity to the present. It was originally published in French, as Habiter la terre: traditions, modernité et avenir de l’art de bâtir en terre crue.

The subtitle—Past, Present, Future— might seem clichéd, though it’s an apt summary of the book’s three key features: a sweeping historical survey, a guide to contemporary trends, and a manifesto for change. That last element is rather excessive, with Dethier’s repeated evangelising about the benefits of raw earth, though the 450 photographs and global coverage make this a definitive book on earth architecture.

The Art of Earth Architecture is one of several recent books on architectural materials. Others include Concrete, Brick, Stone, and Wood (a series by William Hall); Glass in Architecture (by Michael Wigginton); Brick (by James W.P. Campbell); Architecture in Wood (by Will Pryce); Arish (by Sandra Piesik); and Corrugated Iron (by Simon Holloway and Adam Mornement).
Categories: book reviews

The Room Where It Happened 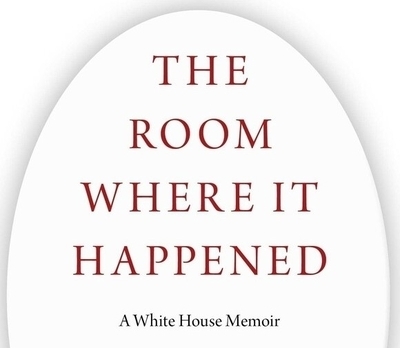 The Trump administration has made three attempts to prevent the publication of former national security advisor John Bolton’s forthcoming book The Room Where It Happened: A White House Memoir. In a letter dated 23rd January, the National Security Council claimed that the book contained classified material: “The manuscript may not be published or otherwise disclosed without the deletion of this classified information.” The book’s original publication date—17th March—was postponed to 12th May, as the NSC’s vetting process continued.

The NSC signed off on the manuscript at the end of April, though Bolton’s successor as national security advisor, Robert O’Brien, argued that “the manuscript described sensitive information about ongoing foreign policy issues”, according to a lawsuit filed on 16th June. The following day, the Justice Department sought an emergency injunction, arguing that the manuscript “still contains classified information”.

The publisher plans to contest the Trump administration’s lawsuits, and publication is scheduled for 23rd June. The Room Where It Happened is currently Amazon’s highest-selling book, based on pre-orders, and Trump’s attempts to suppress it seem highly counter-productive. This is a repeat of the controversy surrounding Michael Wolff’s book Fire and Fury, which also became a bestseller following Trump’s legal threats against it.

Like Fire and Fury, Fear, and A Very Stable Genius, The Room Where It Happened includes highly damaging allegations. Bolton writes that, at a meeting with Chinese President Xi Jinping, Trump “turned the conversation to the coming US presidential election... pleading with Xi to ensure he’d win”. Trump’s exact words were redacted by the NSC—Bolton originally quoted Trump, “but the government’s prepublication review process has decided otherwise”—though Vanity Fair revealed that Trump told Xi: “Buy a lot of soybeans and wheat and make sure we win.”
Categories: book reviews, censorship, Donald Trump, politics

Uncle Boonmee
Who Can Recall His Past Lives 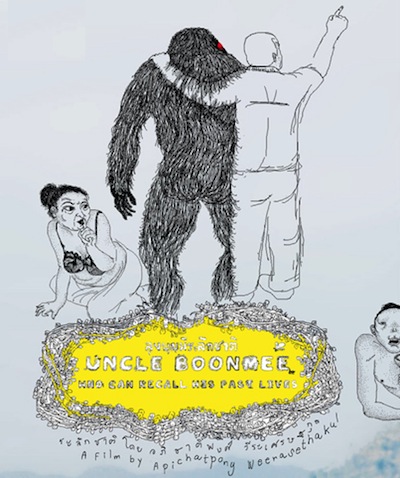 Apichatpong Weerasethakul’s Uncle Boonmee Who Can Recall His Past Lives (ลุงบุญมีระลึกชาติ) will return to the big screen for tenth anniversary screenings starting next week. It will be shown at Bangkok Screening Room on 23rd, 24th, and 30th June; and 1st, 4th, 7th, 9th, 11th, 12th, and 15th July. (Uncle Boonmee was one of the first films ever shown at Bangkok Screening Room, playing there the day after the cinema opened.)
Categories: Apichatpong Weerasethakul, film screenings, Thailand 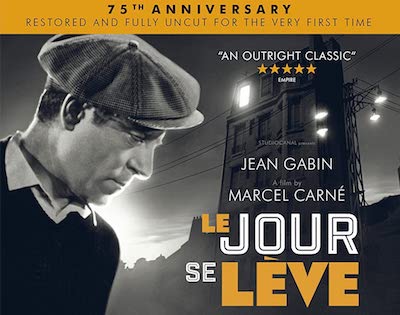 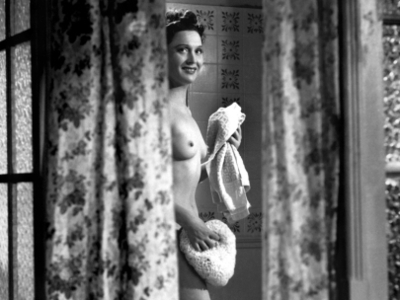 Le jour se lève was released on blu-ray by Studio Canal for its 75th anniversary in 2014. This restored version features two minutes of additional footage—including a rather risqué shot of Arletty in the shower—censored by the French government on the film’s original theatrical release. 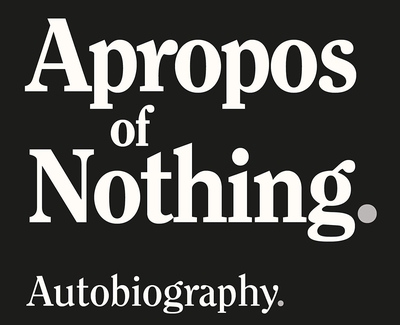 Woody Allen, one of the world’s greatest comedians, has become persona non grata, after a lingering though unproven allegation of child molestation. (His adopted daughter, Dylan, told her doctor in 1992 that Allen had groped her; Allen claims that her mother, Mia Farrow, coached her to lie.) Allen’s autobiography, Apropos of Nothing, has sold surprisingly well despite the controversy and some absurdly vitriolic reviews. (It was compared to Mein Kampf in the New York Post, and a column in The Washington Post was headlined “If you’ve run out of toilet paper, Woody Allen’s memoir is also made of paper”.)

In the book, Allen gives a detailed—though, naturally, one-sided—account of the ensuing custody case. For example, in his summing up, judge Elliott Wilk wrote: “The evidence suggests that it is unlikely that [Allen] could be successfully prosecuted for sexual abuse. I am less certain, however, than is the Yale-New Haven [child psychology] team, that the evidence proves conclusively that there was no sexual abuse.” Allen quotes only the first sentence. He also paints Farrow as “an unhinged and dangerous woman” and insinuates bias on the part of the prosecution, while glossing over the judge’s criticisms of his own parenting.

To borrow a line from Stardust Memories, the best parts of Allen’s autobiography are the “early, funny ones.” (I say parts because there are no chapters or headings.) When he’s writing about happier times (especially his childhood and his relationship with Diane Keaton), the jokes come thick and fast. But his account of his recent films feels much more perfunctory.
Categories: book reviews

The Last President of Europe 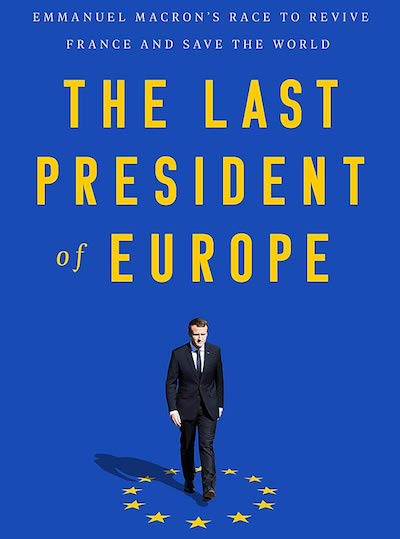 William Drozdiak’s study of Emmanuel Macron, The Last President of Europe, takes stock of Macron’s presidency three years after his election. This is a mostly admiring account, as the subtitle (Emmanuel Macron's Race to Revive France and Save the World) makes clear. Drozdiak interviewed Macron both on and off-the-record, at the Élysée Palace and in Washington.

The book begins with a brief recap of Macron’s domestic reforms and the ‘gilets jaunes’ (‘yellow vests’) protests against his government. This section is overly sympathetic to Macron, with the crisis considered largely from his perspective. (Three paragraphs begin with “Macron believes...”, for example.) Macron is portrayed as a victim of the protesters—his guards “pushed him inside his limousine as the menacing crowd approached”—and their anger is presented as discourteous to the office of the presidency. 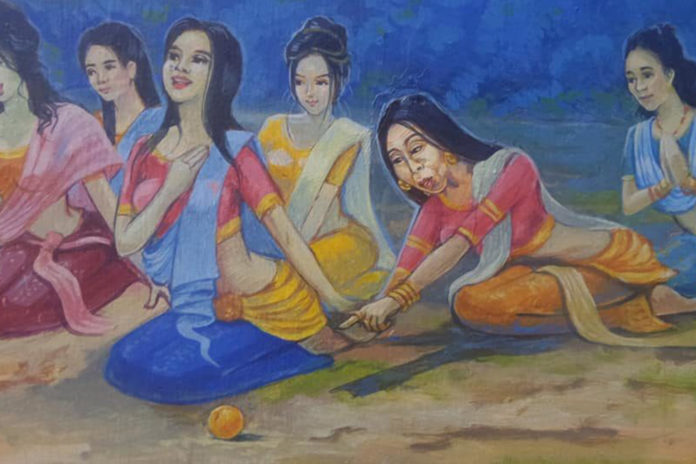 A temple in Uthai Thani province has been ordered to remove part of a mural from its walls, after it was deemed inappropriate. The mural at Wat Nong Tao depicts transgender celebrity Sitang Buathong pointing at an orange, in a reference to her claimed telekinetic ability to stop a rolling orange with the power of her mind.

According to the National Office of Buddhism provincial head, the mural should show Sitang gazing at the Buddha rather than a citrus fruit. Charanpat Kaewum, who painted the mural, has agreed to alter it.
Categories: censorship, Thailand 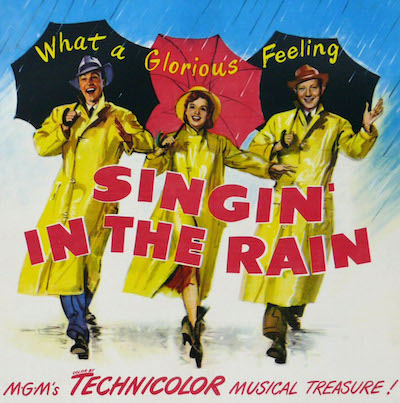 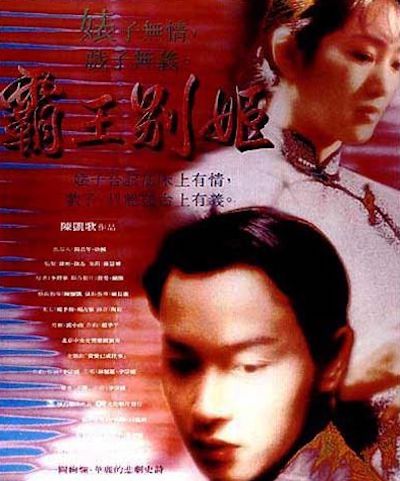 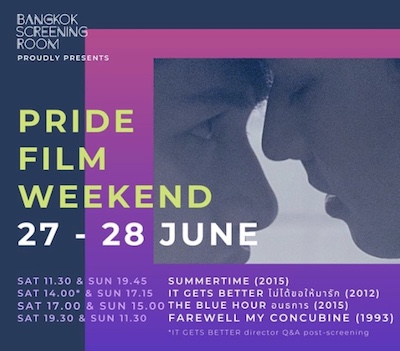 Cinemas in Bangkok reopened today, after two months of closure due to the coronavirus pandemic. Lido Connect will be showing Chen Kaige’s ‘fifth generation’ masterpiece Farewell My Concubine (霸王別姬) this afternoon, and it will also be shown as part of Bangkok Screening Room’s Pride Film Weekend on 27th and 28th June. The film, starring Gong Li, was the first Chinese production to win the Palme d’Or at Cannes.