The Evil of Time's Growth 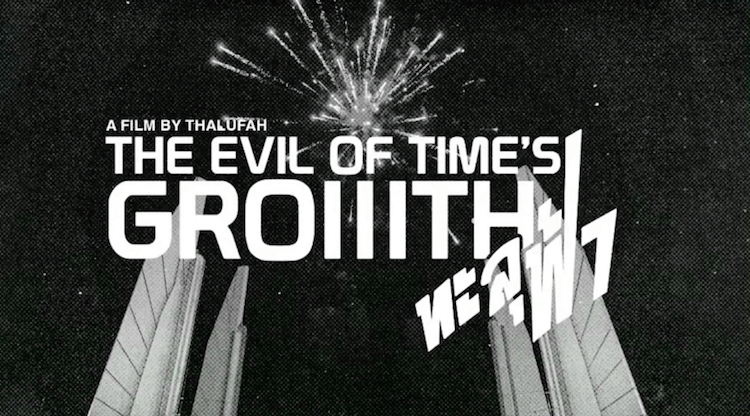 The Evil of Time’s Growth, a feature-length documentary marking the first anniversary of the Thalufah anti-government protest group, was screened at Cartel Artspace in Bangkok yesterday. It’s now available on the group’s Facebook and YouTube channels. The documentary, which is more than 2½ hours long, includes footage of Thalufah marches and demonstrations filmed throughout last year, and interviews with group members and supporters. The most violent incidents from the protests—rubber bullets fired by riot police, and arson by demonstrators—are not included.

Thalufah was founded by Jatupat Boonpattararaksa, and his interview was filmed in front of a large painting by Lucky Leg, which the artist donated to the group. The film was shown as part of The Battle Wound of Thalufah, an exhibition organised by the group, which opened on 31st March. Thalufah previously organised the Specter exhibition, which was later expanded. Rap Against Dictatorship’s single Ta Lu Fah (ทะลุฟ้า) was a tribute to the group, as was the zine Break Through published last year.

[The Evil of Time’s Growth’s Thai title, การเติบโตของปีศาจแห่งการเวลา, is the direct equivalent of the English version, and includes the Thai word ปีศาจ (‘evil spirit’). But when promoting the film, Cartel Artspace replaced the letter จ with ล, a typo that changed the word’s meaning to ‘court’. In the English title, Growth is stylised as “GROIIITH”, a reference to the three-finger salute adopted by the protest movement.]
Categories: films, politics
Dateline Bangkok