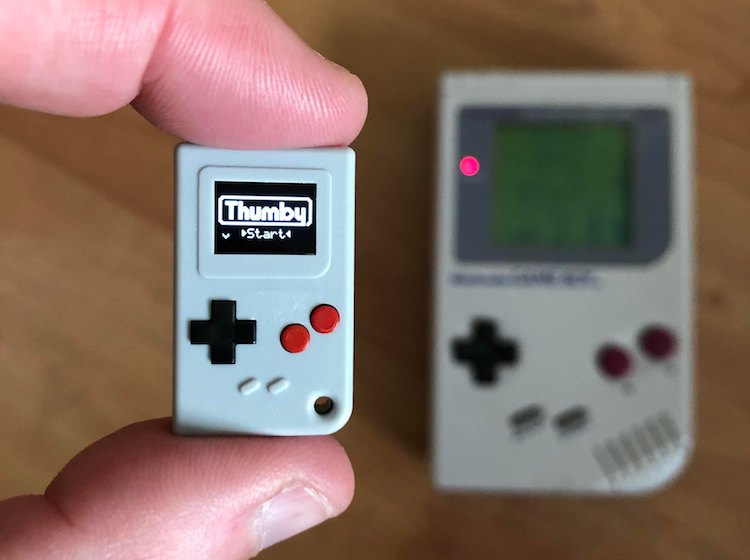 Earlier this year, TinyCircuits launched the Thumby, the smallest games console in the world, which has a ridiculously tiny ½" black-and-white OLED screen. Designed and manufactured in Ohio, the Thumby was inspired by the Nintendo Game Boy (model DMG-01) from 1989, though it’s a fraction of the size. The Game Boy Camera accessory was the world’s smallest digital camera in 1998, and NHJ’s Snap camera was advertised as such in 2004, though later microSD cameras such as JTT’s Chobi range (2011) and MellowCase’s model RX420 (2018) are even smaller. (Chinese copies of the Japanese Chobi cameras have model numbers Y2000 and Y3000; the MellowCase camera is also branded as MHDYT and NIYPS.) The smallest digital pico projector, Orimag’s model P6, was released in 2017.

The smallest digital cassette formats were both developed by Sony: the NT (audio) in 1992, and the MicroMV (video) in 2001. In digital audio, the smallest MP3 players are those produced by Samsung (model YP-T5 from 2004), Apple (the iPod Shuffle from 2005), and MobiBLU (model DAH-1500i from 2005), though they lack in-built speakers. The Russian Edic-mini’s premium Tiny range of digital audio recorders—notably the A31 (2009) and B22 (2012) models—are the snallest in the world. The UK tech company Zini produced a range of Zanco miniature cellphones, including the world’s smallest, the Tiny T1 (2018).

Miniaturisation was a key selling point for consumer technology long before the digital era, and there have also been similar trends in other fields, such as transport, though for very different reasons. There was a mid-century vogue for microcars and ‘bubble cars’, for example: the Messerschmitt KR200, BMW Isetta, and Austin Mini were popular following the 1956 Suez crisis, due to their fuel efficiency. The tiny Peel P50 was the smallest production car ever made, and at more than 100 miles per gallon, Peel claimed that it was almost cheaper than walking.

But technological miniaturisation isn’t primarily driven by economic factors. Instead, smaller gadgets are created because they’re more convenient, and because innovation makes them possible. Cameras, audio player/recorders, televisions, radios, and other analogue devices have been shrunk to pocket size thanks to the development of ever more complex transistors and integrated circuits, a trend that Gordon Moore noted in 1965. (‘Moore’s law’ states that processing power doubles every two years.)

The most famous subminiature cameras, and those with the highest optical quality, were produced by Minox in Germany. Their first model, from 1936, had a stainless steel body. After World War II, Minox released the model A, with the same design as the original in a lighter aluminium body. This was followed by the slightly larger model B, with an in-built light meter. At the other end of the quality spectrum, in the UK, Corona’s Midget camera (1935) was given away with breakfast cereal. The world’s smallest camera, the Petal, was released in Japan in 1947. This minuscule camera, made from chrome-plated brass, is barely larger than a coin. The original circular model was followed by the Everax A (engraved with a floral motif) and the octagonal Sakura Petal. In the 1950s, Tougodo’s Hit range became a generic term for all Japanese subminiature cameras (known in Japan as mame kamera or ‘bean cameras’), though the Hit and its imitators were all inferior copies of more advanced cameras produced by Jilona (the 1937 Midget), Akita (the 1939 Mycro), and Toyo (the 1948 Tone).

The world’s smallest movie camera, the Bolsey 8, was released in 1956. With its stainless steel body, this is a beautiful machine, and it’s smaller than any subsequent movie camera or camcorder. Sony’s Ruvi (model CCD-CR1), from 1998, is the smallest camcorder in the world. It used Hi8 videotape, in a reusable cartridge that also contained the tape mechanism. The smallest movie projectors were manufactured by Kern of Switzerland in 1926—the Micro-Ciné and Presenta Pocket Ciné—both of which projected 9.5mm film cartridges using a bulb powered by an external battery pack.

The Sony M-909 microcassette unit (1991) is often said to be the world’s smallest tape player/recorder, though Dictaphone’s picocassette Exec (model 4250) from 1985 was even smaller. Unlike the M-909, the Exec also has a built-in speaker. The picocassette is the smallest cassette ever made, and in 1987 Bandai produced the smallest tape cartridge, played in a Leadworks miniature Wurlitzer jukebox replica (model 1015). Prior to audio cassettes and cartridges, in 1962 the Lincoln Memocord was advertised as the smallest reel-to-reel recorder. 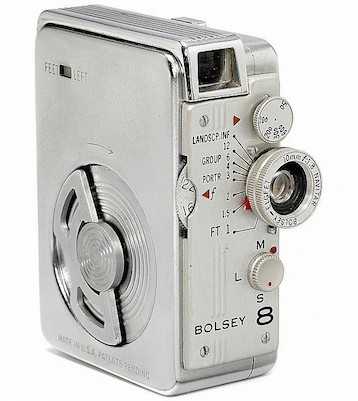 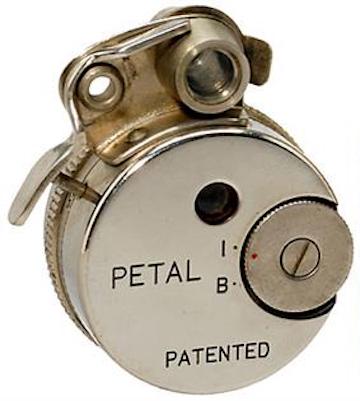 When it comes to handheld televisions, two manufacturers dominated the market: Sony and Casio. The Sony Watchman (model FD-210) was launched in 1982, with a black-and-white CRT screen, and Casio introduced the first LCD screen only a year later (model TV-10). In 1992, Casio’s CV-1 model was the smallest TV thus far, though it needed an external battery and an earpiece antenna. Seiko released its TV watch in 1982, a breakthrough in wearable technology with a tiny 1¼" screen, though it required a separate tuner unit and an earpiece antenna. (Model numbers—DXA-001 and DXA-002 in Japan; T001-5000 and T001-5019 elsewhere—varied according to which accessories were included.) Another TV watch, NHJ’s VTV-101 (and its European model, VTV-201) from 2004, also needed an earpiece antenna. The world’s smallest self-contained TV was released in China less than a decade ago, branded as both MyTech (model MT-101) and Leadstar (model LD-777).

The first transistor radio, Regency’s TR-1, was launched in the US in 1954, but Japanese radios quickly dominated the market after the release of Sony’s TR-63 in 1957 (and the model TH-666 from Hitachi in 1959, which was briefly the world’s smallest). The TR-63 sold millions of units, and miniature Japanese transistor radios were hugely popular in the 1960s, a trend initiated by Standard’s Micronic Ruby (model SR-G430) in 1962. Various companies have staked their claim to ‘the smallest radio in the world’. In 1953, in the immediate pre-transistor era, the Emerson model 747 tube set was accurately advertised as the smallest radio. The same claim was made for two crystal sets—Midway’s Tinytone (1955) and Planatair’s model 76404 (circa 1960)—and Sinclair’s Micromatic transistor unit (1967), though all lacked in-built speakers. (The Micromatic design was copied by the Canadian firm Clairtone in 1968.) The Motz (2010) range of tiny wooden radios and MP3 players made in Korea by Pyramid are smaller than all of these, and they include speakers.

The smallest record players were sold as toys. The Poynter toy company released its Mighty Tiny children’s record player in 1967, promoted as the world’s smallest. Then, in 1987, the same company beat its own record, with a miniature plastic replica Victrola gramophone. The Soundwagon, made in Japan by Tamco (based on a 1976 Sony design), was sold as a toy, though the packaging for its 2018 relaunch—Stokyo’s Record Runner, also made in Japan—states that it’s not suitable for children. (It also includes a disclaimer that the product may scratch records—these devices were nicknamed ‘vinyl killers’, with good reason.) The Record Runner was promoted as the world’s smallest record player, though it’s bigger than Poynter’s Victrola. The smallest records in the world were produced almost a century ago, in 1924, for Queen Mary’s doll’s house. These 1⅓" shellac discs were played on a unique 1:12 replica HMV gramophone.
Categories: media, music
Dateline Bangkok