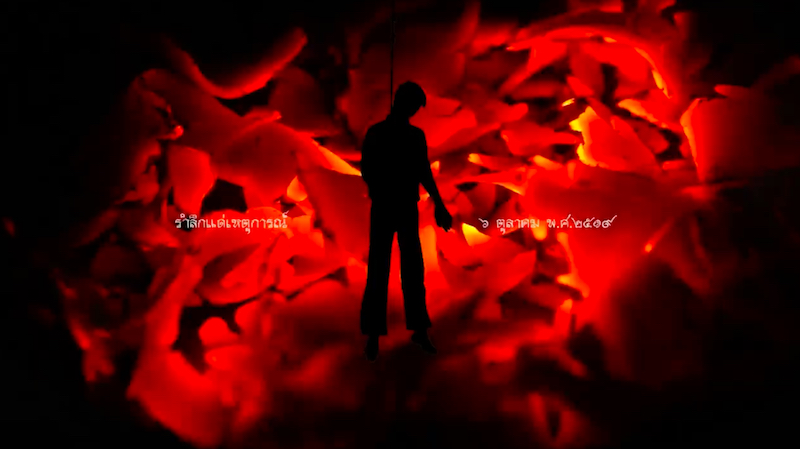 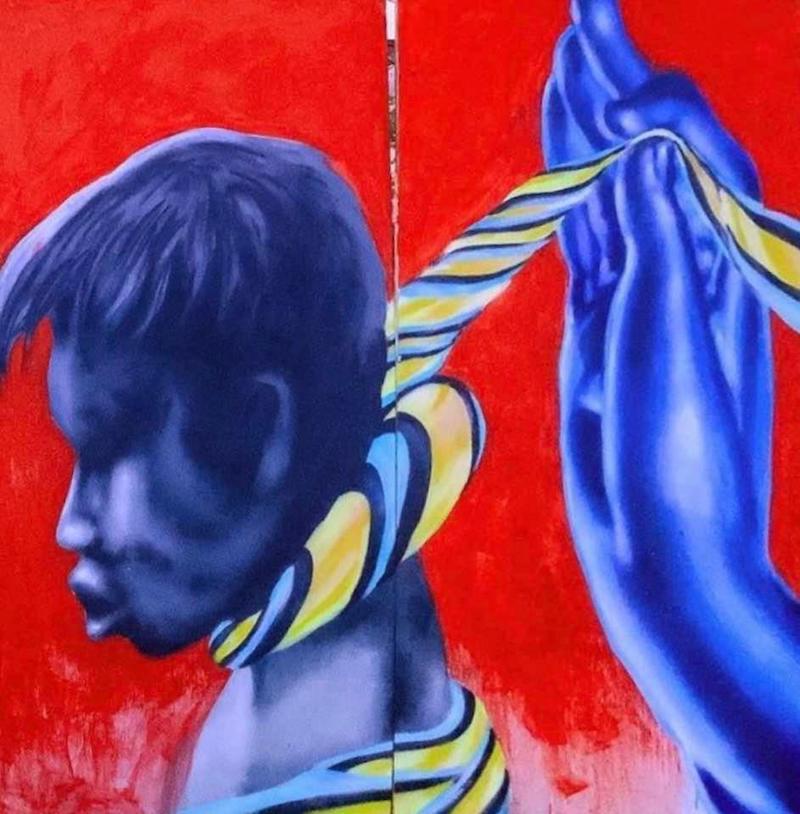 Today marks the 45th anniversary of the 6th October 1976 massacre. There is no official 6th October exhibition at Thammasat University this year (apparently due to pressure from the government), though a large painting by Lucky Leg was displayed on campus today. (It depicts a monk tying a chord around a dead man’s neck, in reference to Kittivuddho Bhikku, the monk who encouraged the killing of Communists.) More of his work is currently on show at the Specter (ปีศาจ) exhibition, and there have been plenty of other artistic responses to the anniversary.

5 ตุลาฯ ตะวันจะมาเมื่อฟ้าสาง (‘5th Oct.: sun rises when day breaks’), the team behind the recent ‘museum in a box’, released a half-hour documentary at midnight this morning. The film, Dawn of a New Day (ก่อนฟ้าสาง), traces the history of the student protest movement from the 14th October 1973 uprising to the 1976 massacre. As in the short film Pirab (พิราบ), the violence of 6th October is represented in sound only, over a blank screen. It ends with footage of water cannon being used against students on 16th October 2020—showing that the mantle of pro-democracy protest has passed to a new generation—and a list of the names of the 6th October victims.

Silence, a three-channel video commemorating 6th October, opened today at 100 Tonson Foundation in Bangkok. The video—co-directed by Apichatpong Weerasethakul, Akritchalerm Kalayanamitr, Chatchai Suban, and Pathompong Manakitsomboon—is part of Apichatpong’s exhibition A Minor History (ประวัติศาสตร์กระจ้อยร่อย), and will be on show until 10th October. Silence includes autopsy photographs of 6th October victims, and graphic footage of the desecration of their corpses. It also shows how prejudice is inculcated, with flashcards of pejoratives such as ‘หนักแผ่นดิน’ (‘scum of the earth’) and ‘ควายแดง’ (‘red buffalo’).

Rap Against Dictatorship released a new music video today, which also refers to 6th October. The video—Burning Sky (ไฟไหม้ฟ้า), directed by Skanbombomb—features a hanging corpse shown in silhouette, and ends with a caption commemorating the massacre. The silhouette echoes Rap Against Dictatorship’s most famous video, My Country Has (ประเทศกูมี), which included a mannequin hanging from a tree.

A music video by T_047—ความฝันยามรุ่งสาง (‘dreaming at dawn’), directed by Yanna—also released today, begins with a toddler watching footage of 6th October on multiple TV screens. Another music video released today, หัวใจเสรี (‘free heart’) by TaitosmitH, has no content directly related to 6th October, though it was released in solidarity with the movement to commemorate the massacre; directed under a pseudonym (อัมรินทร์ อินทารักษ์, meaning ‘Ammarin defender’) it features footage of recent anti-government protests in Bangkok, filmed at Siam Square and Democracy Monument.
Categories: art, films, politics
continued...