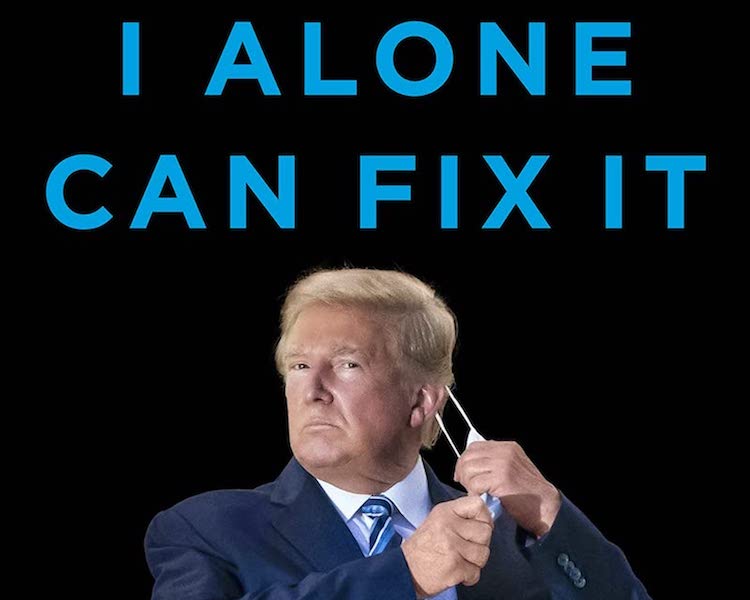 Carol Leonnig and Philip Rucker’s I Alone Can Fix It: Donald J. Trump’s Catastrophic Final Year is billed as “the definitive behind-the-scenes story of Trump’s final year in office.” With much-anticipated Trump books from Bob Woodward (Peril) and Maggie Haberman around the corner, it’s too early to judge I Alone Can Fix It as definitive, but it is a chilling and authoritative account of Trump’s handling of the coronavirus pandemic and the 6th January storming of the Capitol.

Just in case readers were in any doubt as to the authors’ position on Trump, the prologue itemises his flaws: “He displayed his ignorance, his rash temper, his pettiness and pique, his malice and cruelty, his utter absence of empathy, his narcissism, his transgressive personality, his disloyalty, his sense of victimhood, his addiction to television, his suspicion and silencing of experts, and his deception and lies.” (To which I would add: his undermining of institutions.)

Surprisingly, though, there are moments early in the COVID-19 crisis when Trump said and did the right things. In a 7th February 2020 call to President Xi, he pressed for US access to the Wuhan Institute of Virology (“All you have to do is issue the visas and they’ll be there”); and in an 11th March 2020 meeting, he recognised the need for a ban on travel from Europe (“We can’t get these lives back. We can make the money back. We’ve got to shut it down”). (These events were also covered, in less detail, in Woodward’s Rage, though according to Woodward, the Xi call took place a day earlier.)

Like Leonnig and Rucker’s previous book, A Very Stable Genius, I Alone Can Fix It’s ironic title is taken from a typically braggadocious Trump quote. Trump declined an interview request for that earlier book and, as the authors explain, he “attacked us personally and branded our reporting a work of fiction.” Consistently inconsistent, Trump then readily agreed to an interview for the second book, wining and dining the authors at Mar-a-Lago. (“For some sick reason, I enjoyed it”, he tells them after the interview, which appears in the book’s epilogue.)

Most of the other sources are quoted anonymously, though it’s clear that Trump campaign manager Chris Christie and former Attorney General William Barr were among the major sources. A self-serving Christie portrays himself as the voice of reason, as he did in A Very Stable Genius, here contrasting his advice to Trump with Rudy Giuliani’s wild conspiracy theories.

The most extraordinary quotes are those attributed to Mark Milley, the current chairman of the Joint Chiefs of Staff, who apparently “saw parallels between Trump’s rhetoric of election fraud and Adolf Hitler’s insistence to his followers at the Nuremberg rallies that he was both a victim and their savior.” Astonishingly, Milley describes Trump’s undermining of the election as the “gospel of the Führer.”

Aside from A Very Stable Genius and Rage, I Alone Can Fix It is one of a dozen Trump books reviewed here during and after his presidency. The others are: Fear, Fire and Fury, Inside Trump’s White House, The United States of Trump, Trump’s Enemies, The Trump White House, Too Much and Never Enough, The Room Where It Happened, Team of Five, American Carnage, and The Cost.
Categories: books, politics
Dateline Bangkok