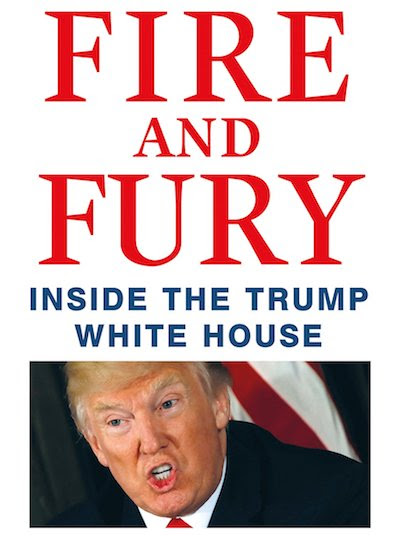 President Donald Trump has attempted to prevent the publication of Michael Wolff's forthcoming book Fire and Fury: Inside the Trump White House. The book was due to be released on 9th January, though it will be published four days early in defiance of Trump's legal threat. The publicity has already made it a bestseller.

According to Wolff's book, Steve Bannon, Trump's former chief strategist, predicted that Trump's eldest son would be one of the casualties of the Special Counsel investigation into collusion with Russia: "They're going to crack Don Junior like an egg on national TV." In response, Trump issued a White House statement attacking Bannon: "When he was fired, he not only lost his job, he lost his mind."

Wolff also quotes Rupert Murdoch describing Trump as a "fucking idiot," echoing Secretary of State Rex Tillerson's earlier comment that Trump is a "fucking moron". (Wolff wrote an authorised biography of Murdoch, The Man Who Owns the News.) His writing has been the subject of a previous legal dispute: GQ magazine was fined £10,000 after one of his articles was found to be in contempt of court.

A cease-and-desist letter, addressed to Wolff and his publisher, was issued by Trump's lawyers today. It claims: "Your publication of the false/baseless statements about Mr. Trump gives rise to, among other claims, defamation by libel". (Trump lies every day, in his tweets and interviews, making his legal action deeply ironic.) The letter also states: "Mr. Trump hereby demands that you immediately cease and desist from any further publication, release or dissemination of the Book".

Following a 1964 Supreme Court decision, libel against public figures requires proof of 'actual malice', and Trump's lawyer attempts to argue that Wolff's book constitutes this: "Actual malice (reckless disregard for the truth) can be proven by the fact that the Book admits in the Introduction that it contains untrue statements." This is a reference to Wolff's explanation for the book's contradictory accounts of some events: "I have let the players offer their versions, in turn allowing the reader to judge them."

A libel case is inconceivable, though Wolff's characteristically gossipy book does include plenty of uncorroborated claims. At times, it also misleads the reader: Wolff describes a "dinner arranged by mutual friends in a Greenwich Village town house", though the house in question was Wolff's own home. Later, he quotes from one of Trump's "unsolicited phone calls without presumption of confidentiality to a passing New York media acquaintance"; the unnamed acquaintance was Wolff himself, and his definition of "confidentiality" is somewhat malleable. He also overstates and obfuscates the extent of his on-the-record access to Trump, which was mostly confined to before the inauguration.

Trump's lawyer is Charles Harder, who also represented Melania Trump in her libel action against the Daily Mail. (She won $3 million in damages.) Previously, Harder represented Hulk Hogan when he successfully sued Gawker for invasion of privacy, winning $140 million in damages and bankrupting the website.
Categories: books, censorship, politics
continued...