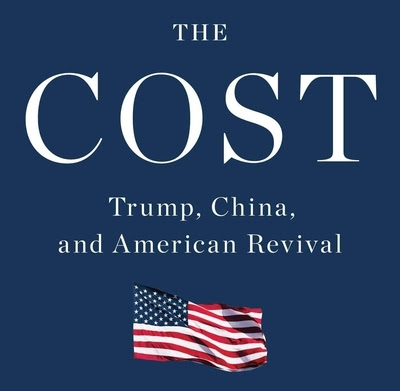 The Cost: Trump, China, and American Revival, by Maria Bartiromo and James Freeman, was published a week before the US election. After reading a dozen books on the Trump presidency (the others being Rage, Fear, Fire and Fury, Inside Trump’s White House, The United States of Trump, A Very Stable Genius, Trump’s Enemies, The Trump White House, Too Much and Never Enough, The Room Where It Happened, and Team of Five), I sincerely hope that this is the last Trump book I’ll ever read.

Bartiromo, like most of her fellow Fox News anchors, asks the softest of softball questions whenever she interviews Trump on television. In the most egregious instance, on 29th November she conducted the first post-election TV interview with Trump, encouraging him to rehash a stream of conspiracy theories and lies about election fraud. Bartiromo and Freeman also interviewed Trump for their book; he refers to former House speaker Paul Ryan as “a f______ disaster”, and says that he was on the verge of telling China: “Go f___ yourself”. [The authors censored the f-words.]

Unsurprisingly, Bartiromo and Freeman stick closely to the discredited Trumpian narrative, arguing that Trump was the victim of a deep-state conspiracy: “the abuse of federal investigative power against him is the greatest scandal of his era.” They also claim that the mainstream media is “unable or unwilling to report on Donald Trump objectively,” which is ironic given the biased, hagiographic nature of their own book.
Categories: books, politics
continued...