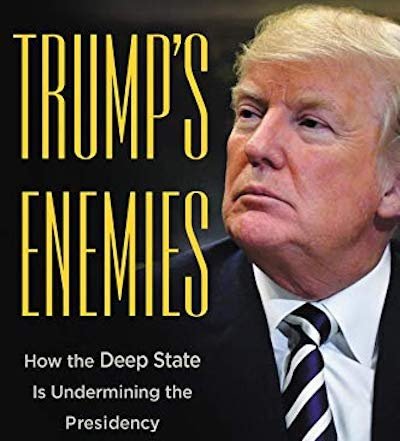 Corey R. Lewandowski and David N. Bossie were the manager and deputy manager, respectively, of Donald Trump's election campaign, and their new book, Trump's Enemies: How the Deep State Is Undermining the Presidency, is every bit as biased as expected. They outline what they see as "the war against President Donald J. Trump, which is being waged at various levels of the intelligence community, the halls of Congress, and even from inside the White House itself."

When they're not recycling 'deep state' conspiracy theories from Fox News, they lavish unconditional praise on Trump. Even Ronald Kessler's hagiographic The Trump White House occasionally tempered its flattery with minor criticisms, though in Trump's Enemies, Trump is practically perfect in every way. The book is ultimately a propaganda exercise, itemising Trump's 'achievements' in a four-page "copy of a list that the president sometimes reads from when he speaks at rallies and other events."

Kessler's book was a response to Michael Wolff's Fire and Fury, and Trump's Enemies is a similar attempt to challenge Bob Woodward's superb Fear. Just as Kessler claimed that Wolff's book was "riddled with false claims," Lewandowski and Bossie describe the meticulously-sourced Fear as "filled with inaccuracies and lies from disgruntled former staffers."

Trump's Enemies includes a lengthy though obsequious interview with Trump, in which he dismisses Woodward: "Look, I don't think he's a very good writer, personally." (In August, Trump told Woodward that he had always admired him.) The authors boast that their Oval Office encounter is "the only formal book interview President Trump has sat for since being elected to office," though Kessler also spoke to the President, claiming that his conversation was "the only interview for a book that Trump said he has given or will give as president".
Categories: book reviews, Donald Trump, politics
continued...