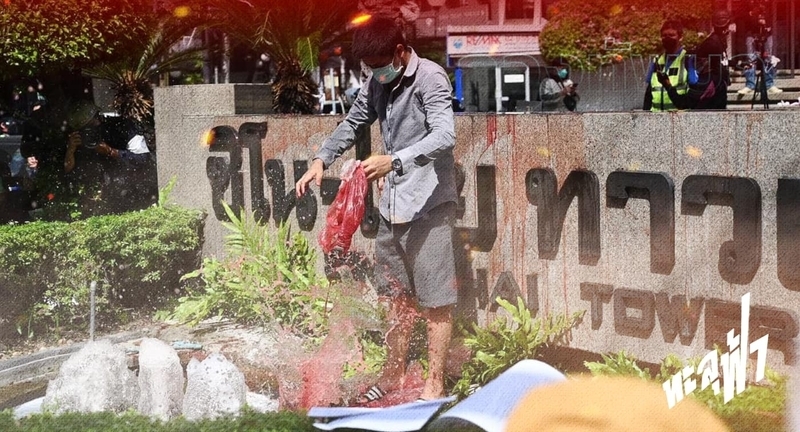 Riot police have fired rubber bullets at anti-government protesters in Bangkok for the third time this month. This afternoon, several hundred protesters gathered at the Sam Liam Din Daeng intersection, and set light to a police booth. Riot police responded with rubber bullets, water cannon, and tear gas. Some of the protesters retreated to Victory Monument, where another police booth was burnt down. They also threw rocks and firecrackers at police.

Elsewhere in Bangkok, a protester splashed pig’s blood onto a sign at Sino-Thai Tower, headquarters of Sino-Thai Engineering and Construction (seen in this photograph by protest group Thalufah). Health minister Anutin Charnvirakul, who has been accused of corruption and incompetence, is a former president of the company. Blood was also used by protesters a decade ago, when it was poured onto the ground outside Government House and used to paint a banner at Democracy Monument.

Clearly, the government has no interest in negotiating with the protest leaders, most of whom are currently being detained without bail. Instead, rubber bullets are now deployed by riot police as standard practice rather than as a last resort. They were used at six previous rallies this year, on 28th February, 20th March, 2nd May, 18th July, 1st August, and 7th August.

Such is the frequency of the anti-government rallies that protesters and the media use daily hashtags to describe them. Today’s hashtag is #ม็อบ10สิงหา (‘mob 10th Aug.’), a significant date as it marks the first anniversary of Panusaya Sithijirawattanakul’s speech outlining the protesters’ ten-point manifesto for reform of the monarchy.
Categories: politics
Dateline Bangkok