The Man Who Owns The News 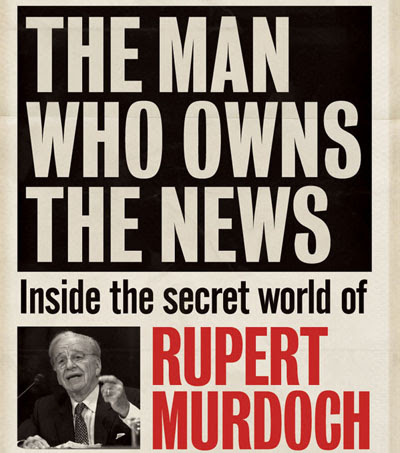 Judging by the volume of information he controls, and the amount of money and influence he has accumulated, Rupert Murdoch is one of the world's most powerful individuals. His company, News Corp., was one of the first media corporations to vertically integrate media production and distribution, and is one of the most powerful global media conglomerates.

Murdoch is the last of the press barons, with a portfolio of prestigious (The Times, The Sunday Times, The Wall Street Journal) and popular (The Sun, the New York Post) newspaper titles. At a time when digitisation threatens the existence of print journalism, Murdoch remains reassuringly committed to his newspapers. Indeed, his forays into digital media (selling MySpace at a loss; the underwhelming The Daily) are uncharacteristic misjudgements, while his television businesses (including the outrageously biased Fox News) remain highly profitable.

Michael Wolff was given unprecedented access to Murdoch, his executives, and even his family. As he writes in the current issue of GQ: "I know what he is thinking; I know how he is thinking it; I know the rhythms of the way he talks about what he thinks; I know what he remembers and I know what he forgets. What's more, all of the people who are as obsessed with Murdoch as I am talk to me about him. I am the father confessor of Murdoch obsessives. If there is anything that can be known about him, I know it. Where he is at any given moment, his mood, his health, his diet, the state of his various relationships, I know. And, of course, Rupert knows that I know all of this and more".

Wolff charts the rise of Murdoch's international empire since the late 1960s, though the acquisition of The Wall Street Journal, the thread that runs throughout the book, receives such close attention that it marginalises other events. Wapping and the print unions, for example, are covered in a single page. Despite the hours of interviews Murdoch granted, Wolff quotes him only sparingly; also, Wolff has a strange habit of writing every sentence in the present tense, even when describing historical events: "Murdoch is born in 1931...".

The book (and its expanded paperback edition, with Wolff's personal account of Murdoch's reaction to the original version) came out prior to this year's revelation that Murdoch's News Of The World hacked into the voicemails of murdered teenager Milly Dowler. Incredibly, the scandal led to the closure of the News Of The World, and a "humble" Murdoch's appearance before a House of Commons committee.
Categories: book reviews, media
continued...