"Malicious and harmful
to Mrs. Trump..." 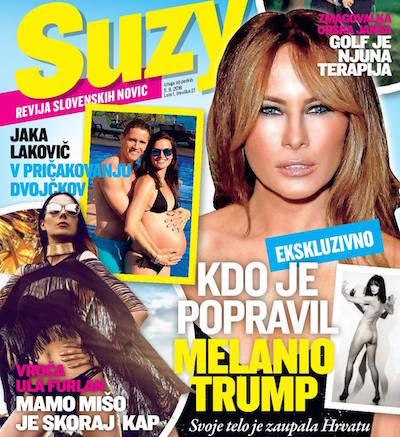 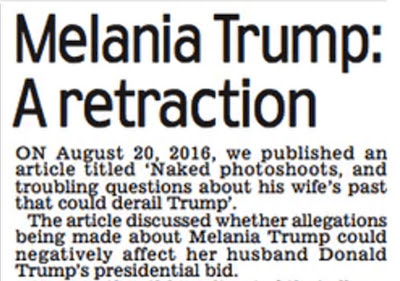 Melania Trump, the wife of US presidential contender Donald Trump, has launched a lawsuit against the Daily Mail newspaper after it published allegations that she had worked as an escort. Her lawyer, Charles Harder, issued a statement saying that the claims were "so egregious, malicious and harmful to Mrs. Trump that her damages are estimated at $150m."

The case was filed today at Montgomery County Circuit Court in Maryland. Donald Trump is notoriously litigious, and Harder has successfully sued the gossip website Gawker into bankruptcy on behalf of another client, Hulk Hogan.

The Mail's article about Melania Trump, written by Natalie Clarke, was published on 20th August (on pages fourteen and fifteen), and also appeared on the newspaper's sensationalist website. After the lawsuit was filed, the Mail went to great lengths to remove all traces of the article online: it was not only deleted from the website, but also expunged from Google's search results, and replaced by the message "Content has been suppressed for editorial and/or legal reasons" in the PressReader digital archive.

The Mail's story was based on a cover story in the Slovenian magazine Suzy, published on 5th August, though the magazine is not named in the lawsuit. The Mail reported Suzy's allegation that models at the agency where Melania Trump worked "principally earned money as elite escorts," though it described the claim as a "seemingly fantastical story" and distanced itself from the magazine: "There is no evidence to back up these startling claims made in Suzy magazine."

The newspaper published a lengthy retraction today: "To the extent that anything in our article was interpreted as stating or suggesting that Mrs Trump worked as an 'escort' or in the 'sex business'... or that either of the modelling agencies referenced in the article were engaged in these businesses, it is hereby retracted, and we regret any such misinterpretation." (The retraction quotes the online headline "Naked photoshoots..." though the print article was headlined "Racy photos...")