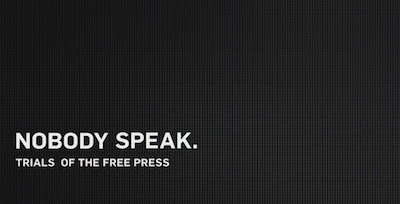 Brian Knappenberger's feature-length documentary Nobody Speak: Trials Of The Free Press was released by Netflix on 23rd June. The programme's thesis, summarised by journalist Leslie Savan, is that "billionaires have been trying to undercut the press, undercut the first amendment, undercut freedom of speech."

In 2012, the blog site Gawker published a two-minute clip from a sex tape featuring wrestler Hulk Hogan. Hogan sued Gawker for invasion of privacy, and won $140 million in damages in 2016, bankrupting the company. Nobody Speak documents the trial, and interviews Gawker staff including AJ Daulerio, who wrote the Hogan blog post. (His only previous interview about the case was in February's Esquire magazine: "the guy who decided to post the Hogan sex tape, hasn't told the story behind his story. Until now.")

Ultimately, Gawker was nothing more than a gossip site, albeit an influential one, and the Hogan sex tape was a fairly open-and-shut invasion of privacy case. As attorney Floyd Abrams explains, "The reason to save Gawker is not because Gawker was worth saving. The reason to save it is because we don't pick and choose what sort of publications are permissible, because once we do, it empowers the government to limit speech in a way that ought to be impermissible."

Hogan's lawsuit was funded by venture capitalist Peter Thiel, a former PayPal CEO. Thiel had no interest in the Hogan case per se, though he saw it as an opportunity to take personal revenge against Gawker, which had outed him as gay in 2007. Thiel hired lawyer Charles Harder, who won the lawsuit against Gawker. (Harder was later hired by Melania Trump, and he won her case against the Daily Mail.)

The documentary spends an hour on the Gawker case, though it also covers casino owner Sheldon Adelson's takeover of the Las Vegas Review-Journal newspaper and US President Donald Trump's sustained attacks on major news organisations. Journalism professor Jay Rosen explains the link between the three cases: "the common thread among the Peter Thiel story, the Adelson story, and the Trump story is billionaires who are proclaiming: we are not vulnerable to truth. We are invulnerable to the facts."
Categories: censorship, Donald Trump, media