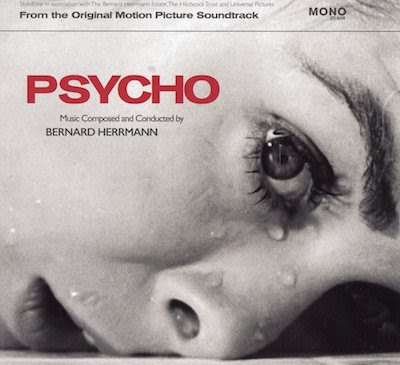 Alfred Hitchcock's Psycho has been available in multiple formats since its original theatrical release in 1960. I've seen it on 35mm, DCP, laserdisc, DVD, blu-ray, VHS (open matte), as an in-flight movie, and on television (in an extended version). The film's script has been published, as part of The Film Classics Library. Hitchcock wrote a publicity booklet, The Care & Handling Of Psycho. There are plenty of books about it, including Alfred Hitchcock & The Making Of Psycho (which inspired the film Hitchcock), The Moment Of Psycho, and Psycho In The Shower.

But Psycho's soundtrack has never had an official release. There have been albums of orchestral performances of the score, some even conducted by composer Bernard Herrmann, though these were recorded many years after the film was made. There are also recordings claiming to be from the original master tapes, though these are poor-quality bootlegs. The closest to a legitimate release of the original soundtrack was Universal's Signature Collection laserdisc, which featured an isolated music track as a bonus feature.

Psycho, a new 7" single from Stylotone, is the first Psycho soundtrack released under licence from Universal. It contains only two tracks (the opening titles music, Prelude; and The Murder, from the shower sequence), though they are sourced directly from the original master tapes. The record was produced in collaboration with the Hitchcock and Herrmann estates, making it as official as they come. It is limited to 1,960 copies, and comes with a postcard featuring a still from the film.
Categories: music
continued...