The Moment Of Psycho 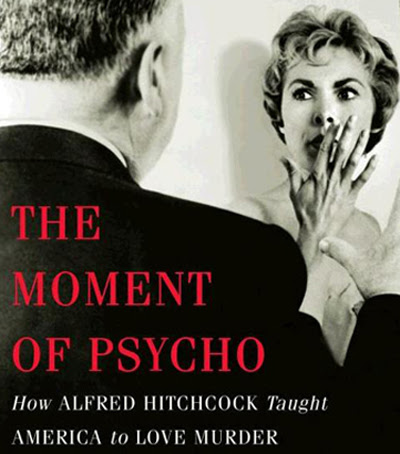 In his new book, The Moment Of Psycho: How Alfred Hitchcock Taught America To Love Murder, David Thomson (author of the surprisingly good Have You Seen...?) claims that Psycho, released in 1960, symbolises the transition from an apparently innocent 1950s to the violence and sexual freedoms of the 1960s. Thomson sees Psycho not only as a milestone in the relaxation of film censorship (leading to Bonnie & Clyde, The Wild Bunch, etc.), but also as a cultural precursor of increasing violence in society (JFK's assassination; the Vietnam war).

I've seen Psycho more times than I can remember; Hitchcock's low-budget shocker, in which Marion Crane steals $40,000 and is murdered in the shower by Norman Bates, is an ideal case study for anyone interested in filmmaking or film analysis. It arguably epitomises the shift from classical to post-classical Hollywood, and indeed David Bordwell divides Hollywood history into pre-1960 (The Classical Hollywood Cinema) and post-1960 (The Way Hollywood Tells It).

Thomson pays particular attention to the first half of Psycho, up to and including the shower scene. He notes the fatalism in Marion's relationship with her lover, and especially savours the parlour conversation between Marion and Norman ("One needs to see this scene several times to catch all the nuances"). However, he's disappointed by the unconvincing plot device (Norman's schizophrenia) in the film's second act, which, he writes, "is as fabricated and spurious as the first hour is solid and resonant".

The Moment Of Psycho, at less than 200 pages, feels like an extended essay with a lot of padding: a production history of The Birds, a mainly expository summary of Psycho's first half, capsule reviews of films influenced by Psycho, and even a chapter on American highways. It would be more satisfying as a single fifty-page chapter, minus the superfluous digressions.