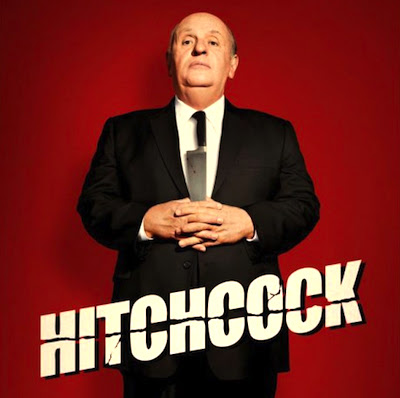 Hitchcock, directed by Sacha Gervasi, was one of two films made last year about Alfred Hitchcock. (Toby Jones starred in the other Hitchcock biopic, The Girl.) Hitchcock dramatises the filming of Psycho, whereas The Girl covered the making of The Birds and Marnie.

Hitchcock ends with a shot of a bird on the director's shoulder, effectively setting up The Girl as a sequel. Hitchcock is generally a much more sympathetic portrayal of the 'master of suspense' than The Girl: Anthony Hopkins plays him as a director fighting for artistic integrity and (in a sub-plot presumably invented by the script-writer) jealous of his wife Alma's interest in another man.

Whereas Toby Jones in The Girl was noticeably shorter than Alfred Hitchcock, Anthony Hopkins has a more suitable stature. In contrast, Jones gave an uncanny vocal impersonation, whereas Hopkins sometimes slips back into his own accent. In one sequence, when he's narrating the script while Marion Crane is driving, Hopkins goes into Hannibal Lecter mode, as if he were psychoanalysing Clarice Starling.

Helen Mirren, playing Alma Hitchcock, is an excellent actress (especially in The Queen), though she is far too tall for this role. (Imelda Staunton, in The Girl, had a remarkable physical resemblance to the real Mrs Hitchcock.) James D'Arcy, playing Anthony Perkins, gives a practically perfect performance, almost indistinguishable from Perkins himself.

Hitchcock was based on Stephen Rebello's comprehensive book Alfred Hitchcock & The Making Of Psycho. (Other books about Psycho include The Moment Of Psycho and Psycho In The Shower.) The production of Psycho is dramatised reasonably accurately, though - presumably for copyright reasons - Psycho's dialogue is always paraphrased.

To add dramatic tension, several nightmarish fantasy sequences show the director becoming obsessed with the serial killer Ed Gein. These are not necessary, and they undermine the film's credibility, though they're fortunately quite brief.

Hitchcock is one of several fictionalised films about the making of real films, including My Week With Marilyn, Gods & Monsters, Ed Wood, RKO281, and Shadow Of The Vampire. Laurent Bouzereau's documentary The Making Of Psycho goes into more depth about Psycho's production, but Hitchcock is extremely entertaining and great fun. It demonstrates one of the director's famous maxims: films should be slices of cake, not slices of life.
Tags: films
continued...