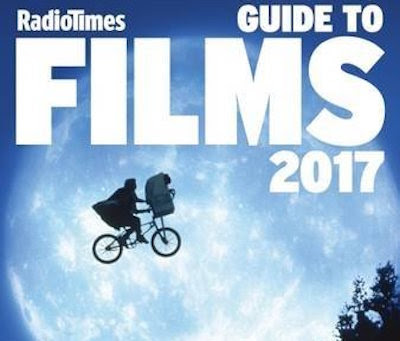 The comprehensive film guide is a concept that unfortunately seems antiquated in the age of the IMDb. Leonard Maltin's Movie Guide ceased publication in 2014. The Time Out Film Guide ended in 2012. Halliwell's Film Guide died an undignified death in 2008 as The Movies That Matter. The Virgin Film Guide finished in 2005. That leaves the Radio Times Guide To Films as the last remaining film guide, and its 2017 edition was published this month. (VideoHound's Golden Movie Retriever is also published annually, though it's restricted to films released on video formats.)

The Radio Times Guide To Films 2017, edited by Sue Robinson, follows the same format as its recent editions, with a vintage cover photograph (in this case, ET: The Extra-Terrestrial) presumably chosen to appeal to its older target demographic. (The traditional Barry Norman endorsement on the cover is an even more clear indication that the intended audience is 'of a certain age'.) It's increasingly surprising that there remains a market for the Radio Times Guide To Films, especially as longer versions of its capsule reviews are available on the Radio Times website, though long may it continue.

New reviews this year include The Hateful Eight ("an immoral western frontier explodes in typical Tarantino, blood-spattered fashion"), The Jungle Book ("finds magic and wonder in the CGI-enabled action"), Independence Day: Resurgence ("the story runs out of steam"), Listen To Me Marlon ("a terrific tapestry of a great star's life"), and Hitchcock/Truffaut ("too much awe and not enough insight"). The book is impressively up-to-date, with reviews of films such as Bridget Jones's Baby that are still on general release.
Categories: books
continued...