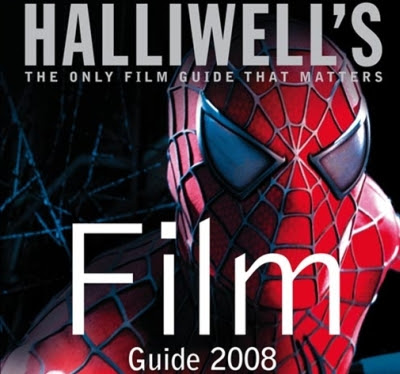 The twenty-third edition of Halliwell's Film Guide, now retitled Halliwell's Film, Video, & DVD Guide 2008, is edited by David Gritten and was published last year. Gritten took over from John Walker, who had edited the Guide since Leslie Halliwell's death in 1989.

Leslie Halliwell was famous for his dislike of modern cinema, refusing to give his maximum four stars to any film made after Bonnie & Clyde. His capsule reviews would damn many films with faint praise, and it's quite fun to look up your favourite films to read the criticisms which accompany even the highest-rated titles. The Seventh Seal, for instance, is a "minor classic", and Annie Hall was successful for "no good reason". Too often, a film's narrative structure is unfairly criticised; for example, Citizen Kane has "gaps in the narrative", Jaws is "slackly narrated", Dr Strangelove has an "untidy narrative", and so on.

In his stint as editor, John Walker rewrote some of the most acerbic reviews and revised many of the star ratings. At the last minute, he requested that his name be removed from this latest edition, hence the sticker bearing David Gritten's name covering Walker's.

Gritten has improved the Guide's layout, with blue text for each film title and a line between each entry. The star ratings are now much more generous than in Halliwell's day - perhaps too generous. The latest edition reviews more than 24,000 films, which is more than most other guides though less than the 27,000 in the current edition of VideoHound's Golden Movie Retriever. VideoHound only includes films available on VHS or DVD, however, so while it does feature DTV titles missing from Halliwell's, it doesn't cover any titles which were released theatrically but not on video. For that reason, Halliwell's is still necessary.
Tags: books
continued...