Listen To Me Marlon 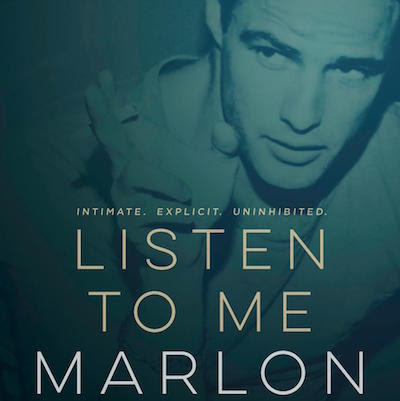 In 2007, TCM broadcast an exhaustive two-part documentary on Marlon Brando. The film (Brando, written by Mimi Freedman and produced by Leslie Grief) was a chronological account of Brando's life, featuring talking-head interviews with seemingly everyone who had worked with him (except Francis Coppola and Jack Nicholson).

Listen To Me Marlon, directed by Stevan Riley, takes a completely different approach: this documentary's soundtrack consists entirely of monologues spoken by Brando himself, excerpted from hundreds of cassette tapes that he recorded throughout his life. These even include self-hypnosis tapes, one of which gives the film its title: "Marlon, listen to my voice..." The result is, at times, like the Kurtz monologues recorded on reel-to-reel tapes in Apocalypse Now.

This audio diary is illustrated by Brando film clips (including A Streetcar Named Desire, The Wild One, On The Waterfront, The Godfather, and Apocalypse Now) and home-movie footage. Key events in Brando's life are summarised by clips from TV news reports, as an alternative to a conventional narrator. Brando's head was digitally scanned in the 1990s, and this ethereal facsimile of his face is animated in synch with his voice-over, creating the ghost of Brando.

Listen To Me Marlon is similar in format to Marlene, Maximilian Schell's documentary about Marlene Dietrich. Like Brando, Dietrich was a legendary star who became a recluse. She refused to appear on camera in Schell's documentary, so he relied entirely on audio of her voice from taped interviews. Also, both documentaries feature sets that meticulously recreate the living spaces of their respective stars.

The Brando tapes are fascinating precisely because Brando himself was so private. He was probably the greatest actor in cinema history, though he rarely gave interviews or made public appearances. Exceptionally, he appeared on CNN's Larry King Live in 1994, though only because he was contractually obliged to do so: "Unbeknownst to me, it was part of the contract, and if I didn't, I would be in breach of contract."

The CNN interview was arranged to promote Brando's autobiography, Songs My Mother Taught Me, a work that's even more revealing than Listen To Me Marlon. The book was largely written by Robert Lindsey - "I have filtered the story of Marlon's life," he explains in the introduction - whereas the film is told in Brando's own words.
Categories: films
continued...