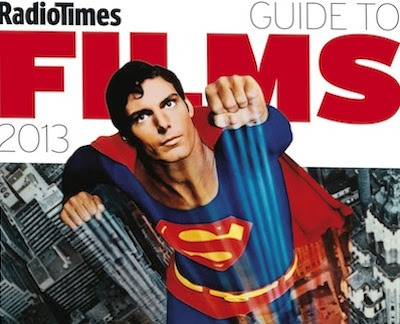 The Radio Times Guide To Films 2013, edited by Sue Robinson, contains capsule reviews of 23,068 films. It has up-to-date coverage of mainstream movies, though entries for foreign and independent films are more limited.

After the cancellation of the excellent Time Out Fim Guide, and the termination of Halliwell's Film Guide with the awful Movies That Matter, the Radio Times Guide To Films is now the last remaining annual film guide published in the UK. It's now in its thirteenth edition, though how long it can survive in print, when many other reference books are moving online, remains to be seen.

518 films have been added since last year's edition. They include The Dark Knight Rises ("a superhero franchise unmatched for its mood, menace and quality"), To Rome With Love ("fluffily entertaining"), Prometheus ("asks profound questions about creation and mortality"), The Artist ("this loving pastiche is a sheer delight"), Hugo ("a little indulgent and heavy for kids"), Carnage ("a tightly wound, enjoyably cynical little chamber piece"), and Spy Kids IV ("frenetic and charmless").

The Radio Times Guide To Films had a now-forgotten predecessor: the Radio Times Film & Video Guide, by Derek Winnert. The book was published in 1993 and 1994, though it was withdrawn from sale after a plagiarism lawsuit from the publishers of Halliwell's Film Guide. There is also a comprehensive Radio Times Guide To TV Comedy.
Categories: books
continued...