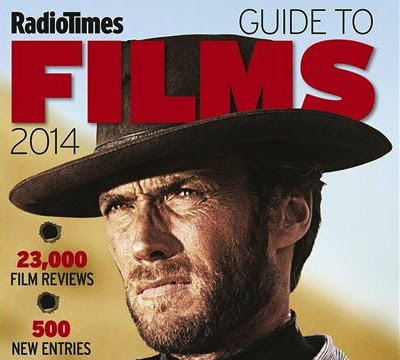 The Radio Times Guide To Films 2014, edited by Sue Robinson, includes capsule reviews of 23,077 films, including 506 new entries. (Last year's edition reviewed 23,068 films, thus 497 have been deleted from the old edition to accommodate this year's new entries, though some of the deletions were previews replaced by reviews.)

The Radio Times Guide To Films, now in its fourteenth edition, is one of the only comprehensive annual film guides still available in print. Halliwell's Film Guide was put to rest after its awful The Movies That Matter edition. The Time Out Film Guide was cancelled last year. Leonard Maltin's annual guide has been split into two editions: a Classic Movie Guide and The Modern Era. VideoHound still publishes its phone-directory-sized annual Golden Movie Retriever, though it's limited to films released on video.

Like Time Out's reviews, the Radio Times Guide To Films entries are all available online for free, so it remains to be seen how long the Guide will continue to be printed. Clearly, though, the publishers feel that there's still a market for such a mainstream and traditional book, perhaps due to the older average age of Radio Times readers. The Guide's cover photo - Clint Eastwood in a still from A Fistful Of Dollars - is another clue that the Guide is catering to an older demographic.

The new entries this year include Hitchcock ("disappointingly inconsequential"), The Hobbit: An Unexpected Journey ("takes a while for the story to get going"), Only God Forgives ("agonisingly slow, and punctuated with graphic scenes of violence"), Lincoln ("brings to life a moment of 19th-century political brinkmanship in captivating style"), and Django Unchained ("audacious and thrilling"). They were all previewed in last year's edition, though they have actually been reviewed in the new edition. (Previews in the new edition include The Hobbit: The Desolation Of Smaug, which is still in production! Including such entries for forthcoming films seems premature and un-necessary.)
Categories: books
continued...