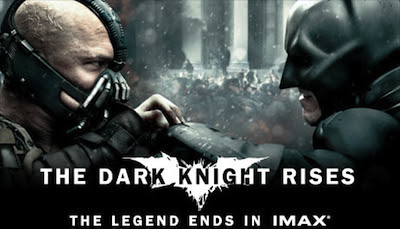 The Dark Knight Rises is the final film in Christopher Nolan's Batman trilogy, following Batman Begins and The Dark Knight. It contains more IMAX footage than any other Hollywood film, with almost half of the film shot with IMAX cameras, resulting in a spectacular 70mm image that fills the enormous IMAX screen. (The 70mm IMAX scenes are framed at 1.43:1; cropped IMAX digital and regular anamorphic widescreen versions have also been released.)

The Dark Knight Rises is most interesting as a celebration of analogue film technology at a time of digital transition. Nolan is (alongside Quentin Tarantino) one of the last Hollywood directors to use 35mm film cameras; even Martin Scorsese (Hugo) and Steven Spielberg (Tintin) have now made digital films. Nolan has actively campaigned for the preservation of analogue cameras and projectors, recognising that digital production and exhibition are cheaper yet technically inferior. Nolan is also notable for his use of traditional sets and special effects, minimising the use of CGI.
Categories: films
continued...