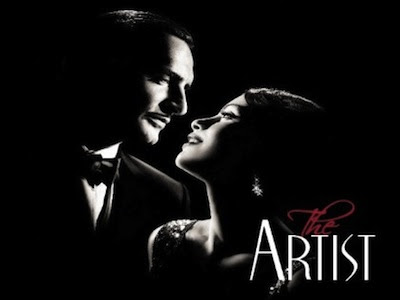 The Artist, directed by Michel Hazanavicius, is, like Martin Scorsese's Hugo, a tribute to silent cinema. However, while Hugo was filmed in 3D, colour, and widescreen, The Artist is a black-and-white, silent film, in the Academy ratio. (Steven Soderbergh attempted a similar technical tribute with The Good German, his black-and-white, Academy homage to Casablanca.)

Hazanavicius recreates, with impressive fidelity, the experience of watching a silent film, though he does bend the rules occasionally (notably in a dream sequence with synchronised sound effects). Inter-titles are used to convey dialogue, though it's often possible to read the actors' lips anyway, because they perform in the traditional overly-dramatic silent-film style. Only in the final few seconds do people actually speak audibly, a moment comparable to the fleeting movement at the end of Chris Marker's photo-roman La Jetee.

The Artist's plot is clearly inspired by A Star Is Born, with a young starlet (Peppy Miller) beginning her career while an established star (George Valentin) fades away. The film belongs in the same company as classic backstage dramas such as 42nd Street, All About Eve, Sunset Boulevard, The Bad & The Beautiful, and The Player. Specifically, as it explores Hollywood's transition to sound after The Jazz Singer, it invokes comparisons with Singin' In The Rain. (The Artist isn't a musical like Singin' In The Rain, though it does include Astaire/Rogers-style tap dancing.) There are also references to Citizen Kane, such as breakfasts revealing the deterioration of a marriage.

The lead male character is partly based on Douglas Fairbanks, and clips from Fairbanks's The Mask Of Zorro are included; his last name, Valentin, also refers to Rupolph Valentino. The heroine quotes Greta Garbo ("I want to be alone"), and insists that the studio hire Valentin just as Garbo demanded a role for John Gilbert in Queen Christina. The strong supporting cast includes John Goodman (playing a movie producer, as he did in Matinee), James Cromwell, and the dog Uggie.

The film's technical sophistication and cine-literacy make it fascinating, though it's also incredibly witty and entertaining. For cinephiles, it's (almost) as exciting as Hugo, though it works just as well for mainstream audiences, too. It has an engaging narrative and it makes silent cinema accessible, and achieves both for 100% of the time. [In contrast, Hugo is 50% exciting plot for kids (the story of the two orphans) and 50% film history for adults (the life of Georges Melies), though the two halves don't quite fit together.]
Tags: films
continued...