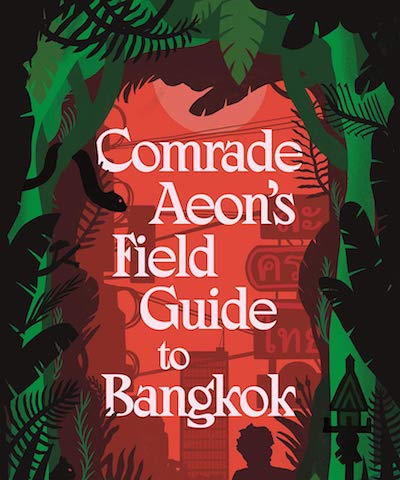 Journalist Emma Larkin’s first novel, Comrade Aeon’s Field Guide to Bangkok, was published in May. (Born in Thailand, Larkin uses a pen name to avoid scrutiny from the authorities while she reports from Myanmar.) The eponymous Aeon is a former Communist insurgent, who fled to the jungle following the 6th October 1976 massacre.

Aeon has since returned to Bangkok, though he (like the city) remains haunted by state violence against civilian protesters. Working as a history teacher, he sees first-hand how 6th October has been whitewashed from the national curriculum—a point made by Vasan Sitthiket in his video Delete Our History, Now! (อำนาจ/การลบทิ้ง)—and searches for what little evidence remains, “the seldom-seen photographs of semi-conscious students burned on funeral pyres made of tyres, and dead bodies hung from the tamarind trees on the parade ground.”

The novel is set in 2009, when red-shirt protesters instigated violence during the Songkran holiday. As one character says, “Did you hear they attacked the Prime Minister’s car?”—Abhisit Vejjajiva’s motorcade was mobbed, an incident recreated in Wisit Sasanatieng’s film The Red Eagle (อินทรีแดง). The red-shirt protests culminated in another state crackdown, in 2010, though the novel focuses on the aftermath of the 1992 ‘Black May’ massacre.

In the days following ‘Black May’, there were credible rumours of military vehicles disposing of hundreds of bodies, who were omitted from the official tally of victims. Larkin recounts the “talk of an army truck driving into a bone mill on the outskirts of Bangkok late one night, the cargo heaped under its tarpaulin conspicuously absent when it drove out again, and reports of military helicopters flying east from the city towards the border with Burma, dropping bodies into the impenetrable jungle below.”

The story’s starting point is a fictional incident that seems to confirm these rumours: bodies found in a sunken shipping container and buried in wasteland. The novel presents these grisly discoveries as proof of “an operation to deal with the ‘excess collateral damage’ resulting from the crackdown on protesters at Sanam Luang”, though a government spokesman dismisses the matter out of hand: “Gazing wearily at the nation, he appeared to ad lib as he took off his spectacles and said in a more casual, almost avuncular tone, ‘So, it’s best that you all go about your business now and forget this incident.’”

Larkin was inspired by two works of political history: William A. Callahan’s Imagining Democracy (now scarce, but the best account of ‘Black May’ in English) and Thongchai Winnichakul’s Moments of Silence. (Aeon “tracked down some of the leaders of the right-wing gangs that had massed in Sanam Luang”, in an echo of the Silence of the Wolf chapter in Thongchai’s book.) Comrade Aeon’s Field Guide to Bangkok is one of several recent novels set in times of Thai political conflict, including Sunisa Manning’s A Good True Thai, Duanwad Pimwana’s ในฝันอันเหลือจะกล่าว (‘indescribable fiction’), Uthis Haemamool’s ร่างของปรารถนา (‘shadow of desire’), and Jakkapan Kangwan’s Altai Villa (อัลไตวิลล่า).
Categories: books, politics
Dateline Bangkok