"The secret life of Melania..." 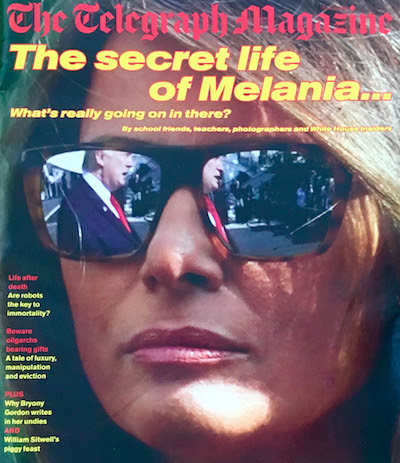 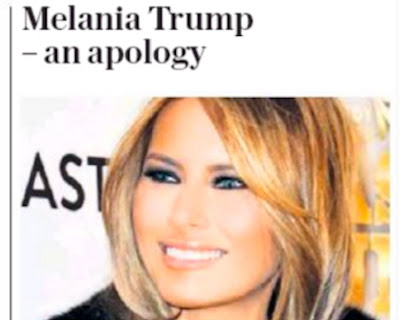 The Daily Telegraph has paid "substantial damages" to Melania Trump in settlement of a defamation lawsuit filed by the First Lady last week. The newspaper printed a correction on 26th January (on page two), apologising for "a number of false statements which we accept should not have been published."

The lawsuit relates to the cover story from The Telegraph Magazine, published on 19th January. The article, by Nina Burleigh, appeared on pages fourteen to twenty, and was based on her book Golden Handcuffs: The Secret History of Trump's Women, which was released in the US last year. (The book's publishers avoided a lawsuit, as American libel law requires proof of 'actual malice', a high bar intended to protect freedom of speech.)

The article was reprinted by the Irish Sunday Independent on 20th January, on page twenty. It has since been deleted from the Telegraph and Independent's websites, and is "suppressed for editorial and/or legal reasons" on the PressReader digital archive.

Ironically, following the Telegraph's retraction, Burleigh has also filed a defamation case against the newspaper, claiming that its apology damaged her journalistic reputation. Yesterday, in a letter to the Telegraph Media Group (TMG), her lawyer argued that "fear of Mrs Trump's lawyer Mr Harder, "the Gawker slayer", caused TMG to capitulate abjectly". This is a reference to Charles Harder, who represented Hulk Hogan in a privacy lawsuit that bankrupted the Gawker website. Harder also won $3 million in damages from the Daily Mail in a previous Melania Trump defamation case.