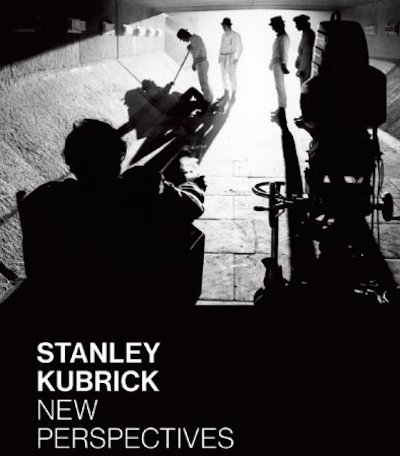 There are individual chapters on all of Kubrick's films from Paths Of Glory to Eyes Wide Shut. Previous books (the Kubrick exhibition catalogue, The Stanley Kubrick Archives, Napoleon, The Making Of Stanley Kubrick's 2001, We'll Meet Again) have also included documents from the Kubrick Archive, though fortunately there is no duplication of this material in New Perspectives.

The book begins with essays on Kubrick's career as a photographer and director in New York. Philippe Mather (author of Stanley Kubrick At Look Magazine) discusses the stylistic influence of Kubrick's photography on his early films. Peter Kramer examines Kubrick's independent films and the Harris-Kubrick production partnership; his essay title quotes from Kubrick's 1964 contract stipulation: "I must have complete total final annihilating artistic control". An essay by Nathan Abrams on Kubrick's Jewish identity is less revealing, and it excludes Kubrick's proposed Holocaust film Aryan Papers.

The most successful chapters utilise script drafts and notes to construct production histories of the films in question. Fiona Radford shows that Kubrick's proposed revisions to Spartacus were not always to the film's advantage: "Although some might believe that Spartacus would have been a better film if Kubrick had been in charge, this is not necessarily the case." Karyn Stuckey reveals that Martin Russ contributed to the Lolita script, and that the film's prologue was written by Kubrick alone: "the entire sequence is written in Kubrick's hand". Catriona McAvoy's essay on The Shining benefits from her interviews with several of Kubrick's collaborators. Lucy Scholes and Richard Martin compare various drafts of the Eyes Wide Shut script.

There are also fascinating accounts of changes that Kubrick made after production was completed. Daniel Biltereyst analyses the censorship of Lolita, based on correspondence between Kubrick and John Trevelyan from the BBFC archive. Mick Broderick uses daily continuity reports from Dr Strangelove "to reconstitute filmed sequences that failed to make the final cut", providing a detailed guide to shots and dialogue from the cutting-room floor. (Broderick was one of the few researchers - the others being Jon Ronson and Bernd Eichhorn - to examine Kubrick's archives in situ at Childwickbury.)

Richard Daniels, who runs the Kubrick Archive, writes about the publicity campaign for Paths Of Glory, revealing that Kubrick was less involved than expected. He demonstrates that marketing decisions were made by James Harris rather than Kubrick, and that press releases did not highlight Kubrick's role in the film's production (in contrast to Kubrick's earlier films, which were largely self-promoted, as Peter Kramer notes in his first chapter).

Pratap Rughani discusses the ethics of war reportage with reference to Full Metal Jacket, noting Kubrick's concern that a Vietnamese perspective (however tokenistic) was missing from the film: "There should be a Vietnamese character to summarize the V. position. We totally lack a V. point of view." Karen A Ritzenhoff writes about the film's pre-production, reproducing a letter from Kubrick about Beckton Gas Works; Kubrick's annotations show his obsession with detail: "Indent 8 spaces... also the spaces between each line at present are not equal."

In other chapters, Robert Poole writes about the evolution of the 'Dawn of Man' sequence in 2001 (covered in more depth in Moonwatcher's Memoir by Dan Richter), Regina Peldszus discusses Kubrick's collaboration with NASA on 2001 (including his letter to Roger Caras), and Tatjana Ljujic examines the paintings that influenced Barry Lyndon. Peter Kramer writes a chapter on A Clockwork Orange (the subject of one of his previous books). Maria Pramaggiore's chapter on Barry Lyndon was adapted from her book Making Time In Stanley Kubrick's Barry Lyndon, though this is not indicated.

There are a couple of minor mistakes. A caption on page 115 refers to "Stanly Kubrick" [sic], and a line is missing from page 118. A letter is described on page 330 as "hand-written in ink", though it was clearly typed, as demonstrated by the illustration on the preceding page.
Categories: book reviews, Stanley Kubrick
continued...