The Making of Stanley Kubrick's
2001: A Space Odyssey 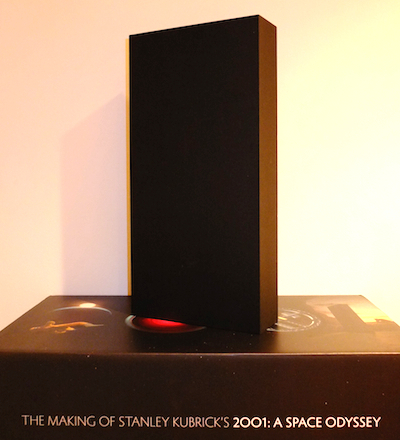 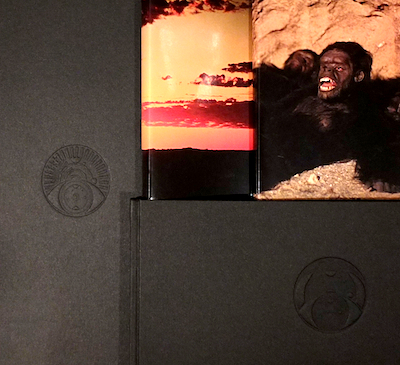 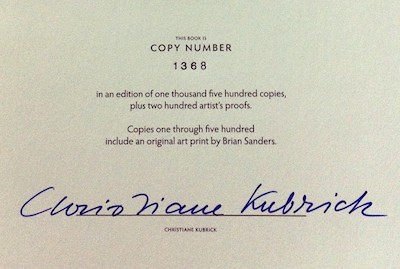 The Making Of Stanley Kubrick's 2001: A Space Odyssey, written by Piers Bizony and published by Taschen, is the most comprehensive guide to Kubrick's greatest film. It consists of four books: two hardbacks in a sleek metal box that resembles the monolith from 2001, and two paperbacks. (It also comes with a reprint of a Mad magazine comic parody of 2001.)

The most substantial volume (a tall, narrow hardback with many fold-out pages) is an expanded and completely revised edition of Bizony's 2001: Filming The Future, documenting "the story of the world's most impressive science-fiction film". It includes concept art and hundreds of photographs from the Stanley Kubrick Archive, though surprisingly there are no reproductions of Kubrick's notes or correspondence. There are limited footnotes and an equally brief bibliography.

The other hardback volume, titled 2001: A Space Odyssey, a wide book that echoes the film's widescreen format, is a collection of stills from the film. The frame-enlargements are noticeably darker than they appear in the film itself, in contrast to the bright, glossy stills in The Stanley Kubrick Archives (also published by Taschen).

The paperback volumes are facsimiles of two pre-production documents: 2001: A Space Odyssey - Script (Kubrick's annotated copy of the prose treatment, written by Arthur C Clarke), and 2001: A Space Odyssey - Notes (production notes compiled by Victor Lyndon). However, there are no drafts of the screenplay, nor Kubrick's special-effects notes. Separate from the metal slipcase, and not matching the two black hardbacks, the paperbacks seem rather incongruous, and it's odd that the entire set wasn't produced in hardback with a wider slipcase. (At least the paperbacks would look better without their dust jackets.)

The book was designed by M/M, who also created Taschen's book about Kubrick's Napoleon. Like Napoleon, The Making Of Stanley Kubrick's 2001 is a limited collector's edition: only 1,500 copies are available (mine being #1,368), all neatly signed by Kubrick's widow, Christiane. Napoleon, with ten volumes all contained within an enormous book, was a more substantial and integrated tribute to a Kubrick project, though such a definitive book on 2001 may be impossible, due to the sheer quantity of archive material. One indication of the attention to detail in the book's design is that its title is rendered as 2OO1 (using capital Os rather than zeros), as in the film's title sequence.

There are already numerous books devoted to 2001, including The Making Of Kubrick's 2001 (by Jerome Agel), The Making Of 2001: A Space Odyssey (by Stephanie Schwam), 2001 Memories (by Gary Lockwood), Moonwatcher's Memoir (by Dan Richter), 2001: The Lost Science (by Adam K Johnson), Are We Alone? (by Anthony Frewin), and 2001: A Space Odyssey (by Peter Kramer). The 2001 File (by Christopher Frayling) will be published in the near future.
Categories: book reviews, Stanley Kubrick
continued...