A scene from Oh My Ghost! 8 (หอแต๋วแตกแหก โควิดปังปุริเย่), the new comedy from Poj Arnon, has been censored. The Film and Video Censorship Committee gave the movie a ‘15’ rating, though only after an entire sequence featuring celebrity monk Paivan Wannabud was deleted. According to the censors, it’s inappropriate for a real monk to appear in an entertainment film, and all footage of him had to be cut. (Coincidentally, Paivan left the monkhood on 3rd December, the day after the film’s release, a technicality that might eventually allow Poj to show the film uncut.)

The censored material is completely innocuous, simply showing Paivan blessing the hotel in which the film is set. In real life, Paivan is famous for his camp mannerisms, which is in keeping with the rest of the film. Poj announced the censors’ decision on 25th November and, after being initially tight-lipped about what had been deleted, he uploaded part of the censored scene online five days later. Other clips from the sequence are included in the film’s trailer.

Surprisingly, a scene mocking Prayut Chan-o-cha escaped censorship. One character complains to another—“You’ve been managing for 7-8 years... You make people poorer and poorer, idiot!... Especially Covid-19, everywhere is fully vaccinated. Except here, only 1 jab or nothing”—who assumes that she’s talking about “Big Tu”. (Tu is Prayut’s nickname.) The film is full of topical references like this, one of which is shockingly insensitive: a parody of police chief Thitisan Utthanaphon’s suffocation of a suspect with a bin liner.

Representation of monks has long been a sensitive subject in Thai cinema, and I wrote a chapter about it in my book Thai Cinema Uncensored. Monks have been censored from recent films such as Kanittha Kwunyoo’s Karma (อาบัติ), Apichatpong Weerasethakul’s Syndromes and a Century (แสงศตวรรษ), Pen-ek Ratanaruang’s Headshot (ฝนตกขึ้นฟ้า), and Surasak Pongson’s Thibaan: The Series 2.2 (ไทบ้านเดอะซีรีส์ 2.2). Similarly, paintings depicting monks were withdrawn from two exhibitions in Bangkok in 2007. 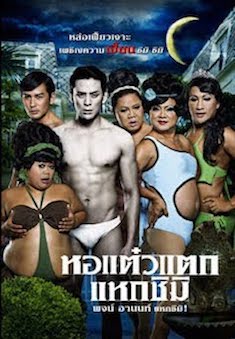 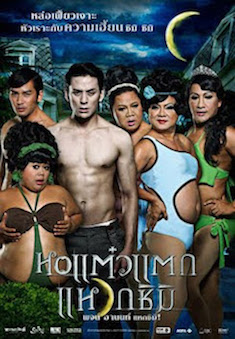 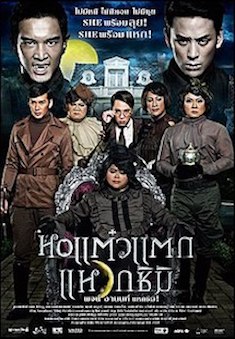 This is the eighth film in Poj’s Oh My Ghost! series, though it’s not the first to be censored. The teaser poster for Oh My Ghost! 3 was judged too risqué: a pair of trousers had to be superimposed over an actor’s skimpy underwear. (A much more modest image was used as the final release poster.) Oh My Ghost! 3’s Thai title was also changed by the censors, from หอแต๋วแตก แหกชิมิ to หอแต๋วแตก แหวกชิมิ. They objected to the word haek (แหก), meaning ‘spread apart’, and changed it to the more polite waek (แหวก). (Karma required a similarly negligible change to its Thai title.)
Categories: censorship, films, politics
Dateline Bangkok