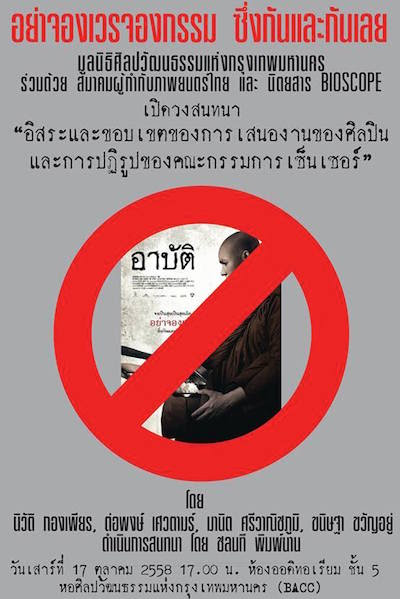 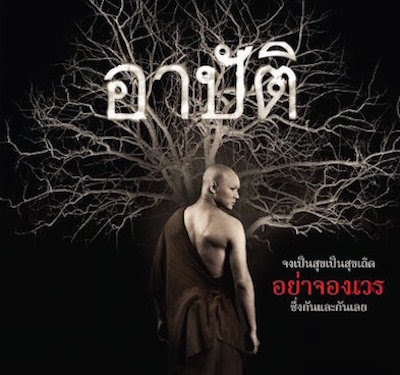 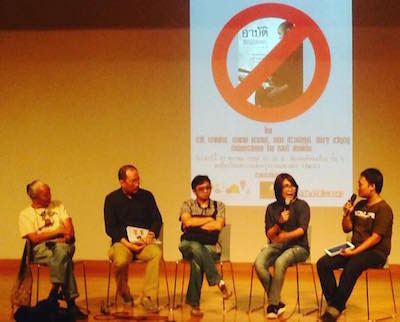 Film director Kanittha Kwunyoo took part in a discussion about censorship and artistic freedom earlier today at BACC in Bangkok. อย่าจองเวรจองกรรม ซึ่งกันและกันเลย was held in response to the banning of Kanittha's new film Karma. BACC organised two similar events in 2013: Freedom On Film (a seminar on film censorship) and งานมอบรางวัลหนังน่าจะแบน (a festival of films that tested the limits of Thai censorship).

Kanittha revealed that she had received abusive messages from some monks who hoped that she would die. She explained that, following the ban, she had cut three minutes from the film, and that this shortened version had been passed by the censor.

The film was released in cinemas yesterday, though the Thai title was altered from อาบัติ to อาปัติ. According to Kanittha, she was required to change the title, as the film could not be released with the same name under which it was previously banned. (Other Thai films have also had their titles changed for censorship reasons: the horror film ก๋วยเตี๋ยว เนื้อ คน was re-titled เชือด ก่อน ชิม to avoid damaging the Thai meatball industry!)
Tags: censorship
continued...