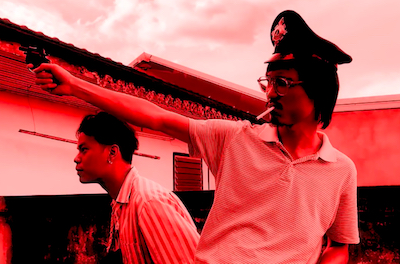 The Thai band View from the Bus Tour released their new single Sun Rises When Day Breaks (ลิ่วล้อ) on 5th October, an appropriate date as it was written in support of the 5 ตุลาฯ ตะวันจะมาเมื่อฟ้าสาง (‘5th Oct.: sun rises when day breaks’) campaign and uses the campaign’s slogan as its English title. The song is one of several commemorating the 45th anniversary of the 6th October 1976 massacre.

The music video for Sun Rises When Day Breaks begins with a recreation of an iconic news photograph from the massacre. Not the ubiquitous image of a man hitting a corpse with a chair, but instead a photo by Kraipit Phanvut showing a police colonel (Salang Bunnag) aiming his pistol while nonchalantly smoking a cigarette. Director Anocha Suwichakornpong restaged the same photo at the start of her film By the Time It Gets Dark (ดาวคะนอง), and it has also been reappropriated by artists such as Headache Stencil.
Categories: music, politics