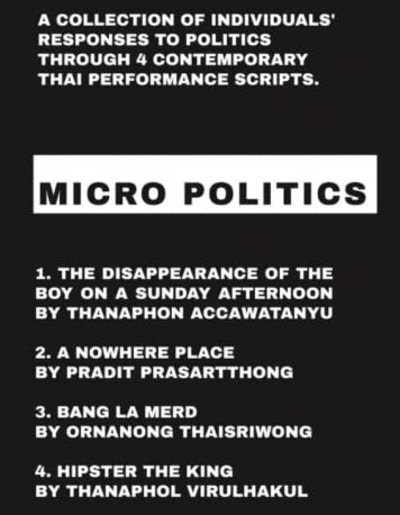 Micro Politics, published in 2018, is a collection of four contemporary Thai plays and theatre performances: The Disappearance of the Boy on a Sunday Afternoon (การหายตัวไปของเด็กชายในบ่ายวันอาทิตย์) by Thanaphon Accawatanyu, A Nowhere Place (ที่ ไม่มีที่) by Pradit Prasartthong, Bang La Merd (บางละเมิด) by Ornanong Thaisriwong, and Hipster the King by Thanaphol Virulhakul. The scripts are printed in both Thai and English, and the book also includes interviews with each playwright.

The four works were all performed in the aftermath of the 2014 coup, at a time of increased political repression. Military officers attended and videotaped almost all performances of Bang La Merd, in an act of intimidation through state surveillance. As the publishers explain in their introduction, the collection is “a chronicle of social changes during those trying times, reflecting on the effects of the regime on individuals, questioning the events, and offering insights towards political problems in Thailand.”
Categories: books, politics
continued...