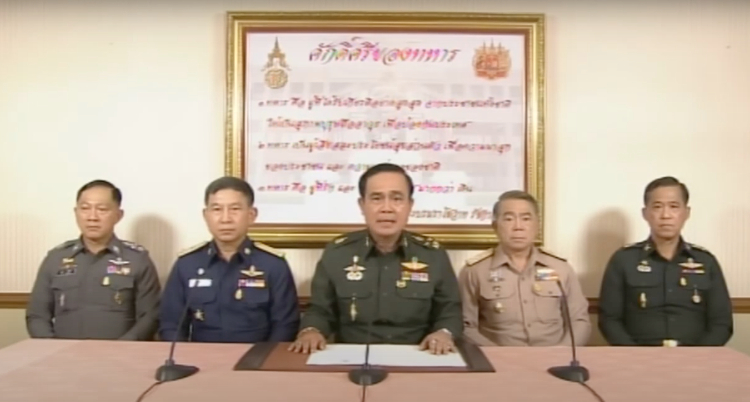 At 4pm today, the Thai military launched another coup. Army chief Prayut Chan-o-cha, head of the military junta, confirmed the coup in a live television announcement broadcast on all channels, and all civilian broadcasting has been suspended. A night-time curfew has been imposed. The constitution (itself drafted by the military following their previous coup) has been abrogated. Including today’s takeover, there have been a dozen successful coups since Thailand’s first constitution in 1932.

Since their declaration of martial law on Tuesday, the military had been acting as a mediator between the UDD, the PDRC, the Election Commission, Pheu Thai, and the Democrats, with representatives from each group meeting for negotiations at the Army Club in Bangkok. Prime Minister Niwatthumrong Boonsongpaisan did not attend the meeting, though Niwatthumrong, the cabinet, and former prime ministers Yingluck Shinawatra and Somchai Wongsawat have been ordered to report to army HQ.

This afternoon, Suthep Thaugsuban, Jatuporn Prompan, and other UDD and PDRC leaders were arrested during the Army Club negotiations. Former PM Abhisit Vejjajiva has also been detained. It is not clear if the army launched the coup because the negotiations were not progressing, or—a more likely scenario—if the coup was premeditated and the negotiations were a pretext to detain the protest leaders. The UDD and PDRC protests have now been dissolved.
Categories: politics