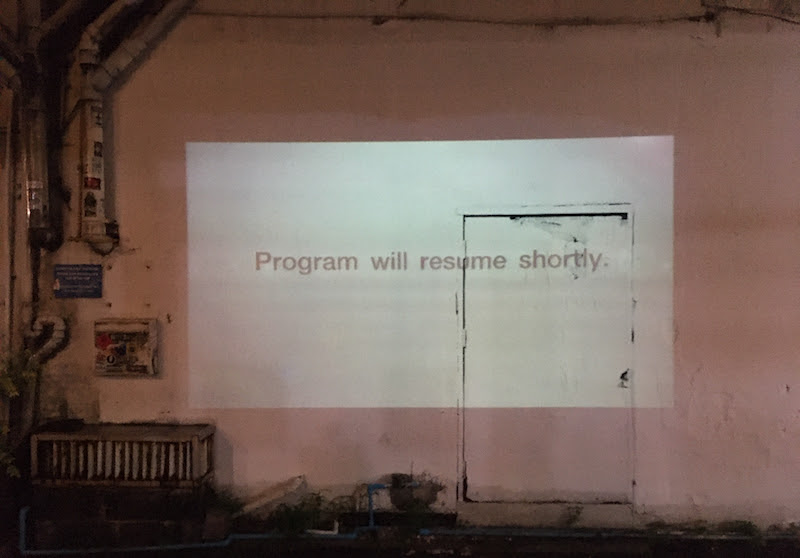 Six years ago, WTF Gallery staged the group exhibition Conflicted Visions, an examination of Thailand’s political polarisation. The exhibition was held at the height of the 2014 political crisis, opening on the same day that the Constitutional Court began its investigation of Yingluck Shinawatra. Today, the political atmosphere is less volatile—due to the military government’s emergency decree, enacted on 24th March to deal with the coronavirus pandemic, but extended as a means of suppressing dissent—though Thailand remains as polarised as before.

Conflicted Visions Again, which opened at WTF on 2nd July, reunites the artists from the original exhibition, to offer a reflection on six years of political tensions since the 2014 coup. Prakit Kobkijwattana appropriates the phrase ‘new normal’ to describe not coronavirus social distancing but Thailand’s political status quo: painting the phrase on silhouettes of guns, a soldier, and a skull, he shows that militarism has become Thailand’s de facto system of government. A work from Miti Ruangkritya’s Thai Politics series is also included: visitors are invited to decorate a screengrab from Prayut Chan-o-cha’s weekly propaganda broadcast Return Happiness to the People (คืนความสุข ให้คนในชาติ) with emoticon stickers.

Manit Sriwanichpoom’s installation Program Will Resume Shortly reproduces the caption broadcast by cable TV company TrueVisions to censor coverage of the Thai monarchy by international news channels. Manit shows the caption on a three-minute loop, to demonstrate that, in fact, the program will not be resuming. (The video is also projected onto a wall opposite the gallery entrance.) The exhibition also features posters by Pisitakun Kuantalaeng: his 10 Year: Thai Military Crackdown [sic] series documents the victims of the final week of the massacre of ‘redshirt’ protesters in May 2010. (His prints are available as a box set, and his new album, Absolute Coup, will be released at the end of this month.)