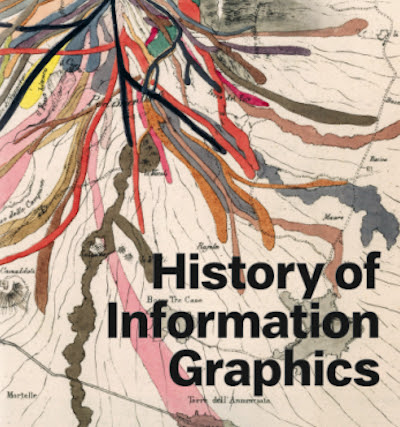 Sandra Rendgen’s Information Graphics began with a fascinating 100-page section on the history of infographics, and her follow-up book Understanding the World reproduced several historical infographics. Her latest book - like the previous volumes, published by Taschen in folio format and edited by Julius Wiedemann - is a survey of 1,000 years of information graphics.

History of Information Graphics includes more than 400 infographics, “from the Middle Age manuscript culture in Europe through the Renaissance and modern era to the European and North American mass media of the 20th century.” The reproductions (including six fold-outs) are treated not as mere illustrations, but as functional data sources, printed with such clarity that their maps and charts remain legible.

The book’s many highlights include a plate from Andreas Cellarius’ Harmonia Macrocosmica, volvelles from Peter Apian’s Astronomicum Caesareum (also reproduced in Cosmigraphics), and Joseph Minard’s flow map of Napoleon’s Russian campaign. (Rendgen is an expert on Minard, whose map was described by Edward R. Tufte in The Visual Display Of Quantitative Information as “the best statistical graphic ever drawn”.)

Unfortunately, the elegantly simple yet revolutionary diagram of a heliocentric solar system by Nicolaus Copernicus (reproduced in 100 Diagrams That Changed the World) is not included. John Snow’s influential map of London cholera infections is an even more surprising omission, though it was featured in Rendgen’s first book, Information Graphics.

History of Information Graphics is the first comprehensive history of the entire field of infographics, though there have been previous books on specific infographic formats, such as the timeline (Cartographies of Time), the cutaway (Look Inside), the tree diagram (The Book of Trees), and the educational chart (The Art of Instruction). Also, Visual Journalism and Harold Evans’ Pictures on a Page discuss the development of news graphics.
Categories: books
continued...