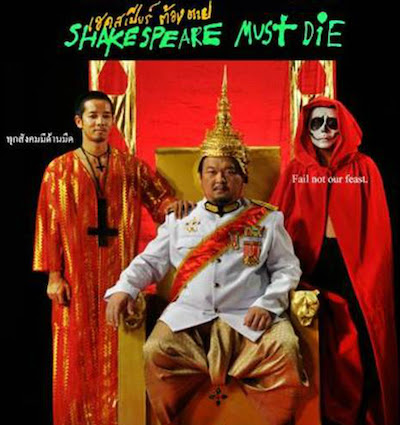 Ing Kanjanavanit's Shakespeare Must Die (เชคสเปียร์ต้องตาย) was banned in 2012. When I interviewed her about the film in 2016, she didn't mince words, describing the censors as "a bunch of trembling morons with the power of life and death over our films." The Appeals Court upheld the ban last year. Ing and her producer, Manit Sriwanichpoom, are currently appealing to the Supreme Court, though in the meantime, the film remains in limbo.

While it cannot be screened commercially in Thailand, as it remains banned, it was shown yesterday at a members-only event at Cinema Oasis, the venue Ing and Manit founded earlier this year. Cinema Oasis is also the only cinema willing and able to show Ing's Censor Must Die (เซ็นเซอร์ต้องตาย), her documentary about the banning of Shakespeare Must Die.

Shakespeare Must Die is a Thai adaptation of Macbeth, with Pisarn Pattanapeeradej in the lead role. The play is presented in two parallel versions: a theatrical production in period costume, and a contemporary political interpretation. The period version is faithful to Shakespeare's original, though it occasionally breaks the fourth wall, with cutaways to the audience and an interval outside the theatre (featuring a cameo by the director).

In the political version, Macbeth is reimagined as Mekhdeth (also played by Pisarn), a head of state facing a crisis. Street protesters shout "ok pbai" ('get out!'), and the protests are infiltrated by assassins described in the credits as 'men in black'. Ing denies any direct satire on Thai politics, though "Thaksin ok pbai" was the PAD's rallying cry, and 'men in black' were blamed for instigating violence in 2010. Another line in the script - "Dear Leader brings happy-ocracy!" - predates Prayut Chan-o-cha's propaganda song Returning Happiness to the Thai Kingdom (คืนความสุขให้ประเทศไทย).

The climax, a recreation of the 6th October 1976 massacre, is the film's most controversial scene, and the main reason for the ban. A photograph by Neal Ulevich, taken during the massacre, shows a vigilante bashing a corpse with a chair, and Shakespeare Must Die restages the incident. A hanging body (symbolising Shakespeare himself) is repeatedly hit with a chair, though rather than dwelling on the violence, Ing cuts to reaction shots of the crowd, which (as in 1976) resembles a baying mob. Ing previously painted a series of portraits of onlookers from Ulevich's photograph for the Flashback '76 (อดีตหลอน) exhibition.
Tags: censorship, films, politics
continued...