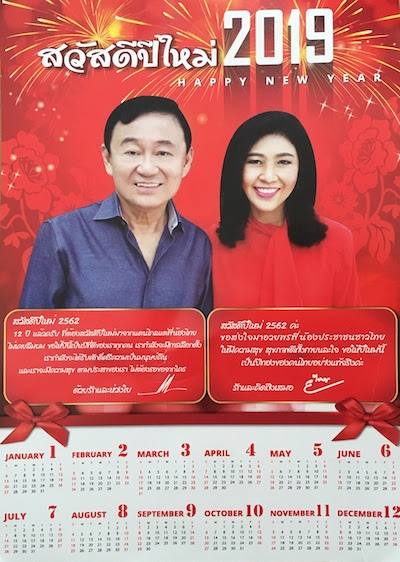 Police officers and soldiers in Ubon Ratchathani have seized copies of a 2019 wall calendar. The calendar features photographs of Thaksin and Yingluck Shinawatra, the message "HAPPY NEW YEAR" in English and Thai ("สวัสดีปีใหม่ 2019"), and new year's greetings from the two former prime ministers.

5,553 of the calendars were confiscated yesterday. The seizure came a day after a woman in Udon Thani, who posted photographs of the calendar online, was visited by police officers and soldiers.

Similar calendars were banned in 2016, along with plastic Songkran bowls, which also featured seasonal messages from Thaksin and Yingluck. All political activity has been prohibited by the military junta for the past four years. Thaksin and Yingluck were both removed from office by military coups (in 2006 and 2014, respectively).
Categories: censorship, politics, Thailand, Thaksin Shinawatra, Yingluck Shinawatra
continued...