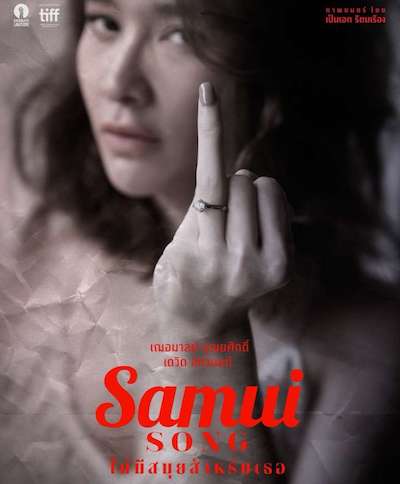 Samui Song (ไม่มีสมุยสำหรับเธอ) is Pen-ek Ratanaruang's first film since his documentary Paradoxocracy (ประชาธิป'ไทย). With Samui Song, he returns to his more familiar neo-noir territory: a lakorn (soap opera) actress hires a hitman to kill her husband, in a setup inspired by Double Indemnity. The film opened in Thailand last week, and Pen-ek took part in a Q&A at Paragon Cineplex in Bangkok on Sunday.

Vi, the actress, feels typecast in bitchy lakorn roles, and asks her agent for an audition with an (unnamed) arthouse director. The agent (echoing a civil servant's comment about Apichatpong Weerasethakul) dismisses his films as boring, and insists that Thai audiences prefer lakorn. In a metafictional twist, the 'boring' film the agent describes is Pen-ek's Invisible Waves (คำพิพากษาของมหาสมุทร), Vi is played by real-life soap star Chermarn Boonyasak, and Samui Song is as melodramatic as any lakorn series.

Vi's husband, Jerome, is rich and successful though sexually impotent. In one sequence, he tries to jerk off, though he remains flaccid. (Surprisingly, the film was released uncut with an '18' rating despite its male frontal nudity.) Jerome is a devotee of a cult-like Buddhist sect, and he even allows its leader to rape Vi. (The sect, whose members wear grey rather than saffron robes, is based partly on the corrupt Wat Dhammakaya.) Pen-ek appears in a TV interview with the cult leader, making merit in the vain hope that his film will be a box-office hit.

Engaging hitmen have featured in several of Pen-ek's films - Invisible Waves, Headshot (ฝนตกขึ้นฟ้า), Fun Bar Karaoke (ฝันบ้าคาราโอเกะ) - and Guy, the hitman in Samui Song, is the film's only multidimensional character. (He's a contract killer, yet he also cares for his sick mother.) Guy bludgeons Jerome with a phallic sculpture (as in A Clockwork Orange), though things take a Hitchcockian turn when the murder goes wrong (shades of Dial M for Murder). There is also a Buñuelian influence, specifically from [possible spoiler alert] That Obscure Object of Desire (Cet obscur objet du désir).

At key points in the film, Pen-ek jumps forward in time elliptically, leaving gaps in the narrative. Vi and Guy eventually seem to disappear from the story altogether. In their place, three new characters are introduced: a lesbian couple and their young son. How much of what happens are we supposed to believe? It's possible that the entire plot is a film-within-the-film, the Pen-ek project that Vi initially wanted to audition for. The twist ending offers no resolution to this satisfyingly ambiguous film.
Categories: films