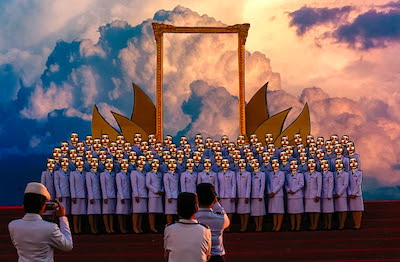 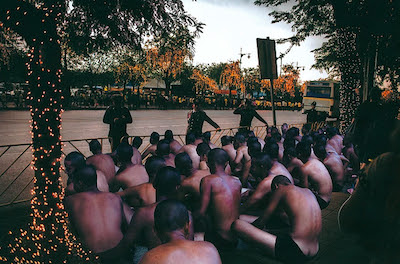 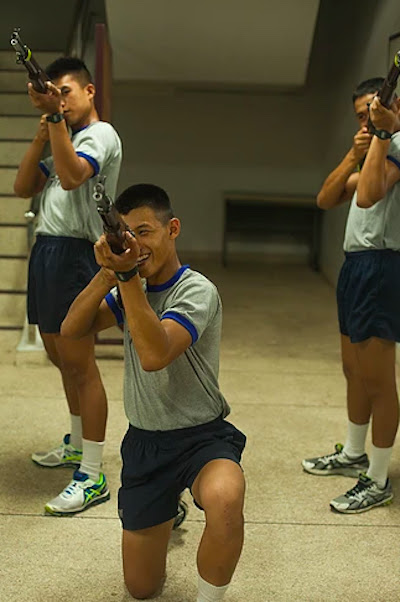 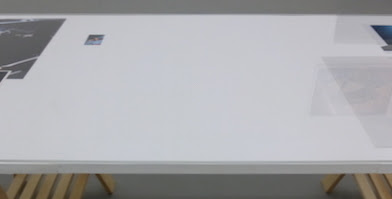 A group of soldiers visited Gallery VER in Bangkok yesterday, and removed three photographs from photographer (and sPACEtIME co-director) Harit Srikhao's exhibition, Whitewash. The exhibition is Harit's personal response to the 2010 military massacre, when the army opened fire on red-shirt protesters and almost 100 people were killed.

One of the images (Chosen Boys) shows military cadets waiting for a royal procession. In another (Cadets), three cadets pose with rifles during their military training. In the third photo (Heaven Gate), the faces of a group of female civil servants have all been replaced by a Ravinder Reddy sculpture of a golden head. (The sculpture was installed outside CentralWorld, one of the buildings damaged by arson following the 2010 massacre.) A sketch of Sanam Luang, and a seven-page handwritten diary about 2010, were also removed from the exhibition.

Gallery VER (previously located across the river in Thonburi) is next door to another gallery, Cartel Artspace, and it was there that the seven soldiers had originally intended to inspect. They apparently noticed the VER exhibition only by chance, while waiting to gain access to Cartel. By coincidence, two of the photographs in question appear as consecutive double-page spreads in the current issue of Foam (on pages 220-223), and the magazine has been withdrawn from sale in Bangkok.

This is the third time in the past decade that exhibitions in Bangkok have been censored. Withit Sembutr's painting Doo Phra, depicting a group of Buddhist monks crowding around an amulet-seller, was removed from the Young Thai Artist 2007 exhibition at Esplanade. Five pictures by photojournalist Agnes Dherbeys were removed from the Rupture exhibition at BACC.

Dherbeys' photographs, like Harit's, depicted the 2010 protests. In all three exhibitions, the spaces left by the removed works remained conspicuously empty, to highlight the censorship. Whitewash opened on 3rd June, and is scheduled to run until 22nd July.
Categories: art, censorship, politics
continued...