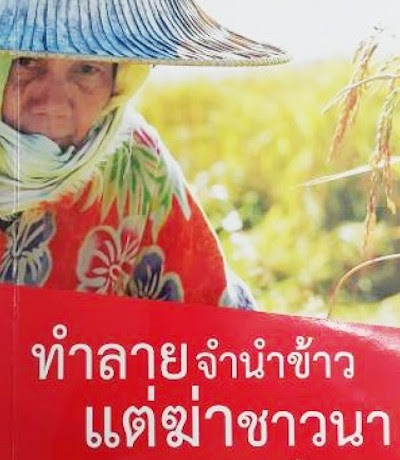 ทำลายจำนำข้าว แต่ฆ่าชาวนา, a defence of Pheu Thai's rice subsidy policy, was published on 1st May, though there have been several attempts to prevent its distribution. Police and military officers suspended a press conference announcing the book on 25th March, and a book launch scheduled for 29th April was cancelled. 190 copies of the book were seized from the home of one of its writers, Suchart Lainamngern, on 27th May. (The other authors are Yuttapong Charasathien, Niyom Changpinij, Surasarn Phasuk, and Somkid Chuakong.)

The rice subsidy scheme was implemented by former Prime Minister Yingluck Shinawatra in 2011. Her government agreed to pay farmers up to 50% above the market rate for their rice, intending to withhold it from the world market and thus drive up the price. As a result, countries such as India and Vietnam increased their rice exports, and the government was left with vast stockpiles of rice that it could not sell.

In 2014, the national Anti-Corruption Commission brought charges against Yingluck for her role in the policy, and she was retroactively impeached by the National Legislative Assembly in 2015. After an investigation into the scheme, she was fined $1 billion last year.
Tags: books, censorship, politics
continued...