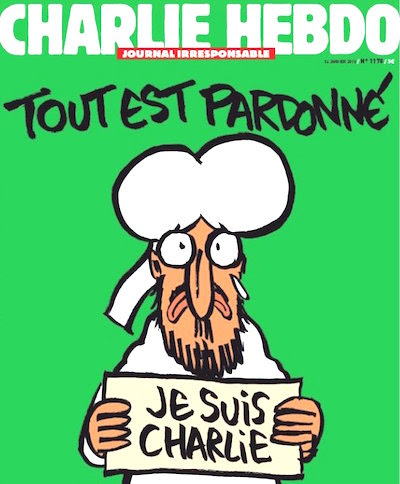 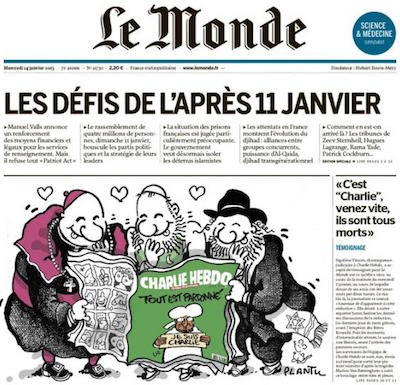 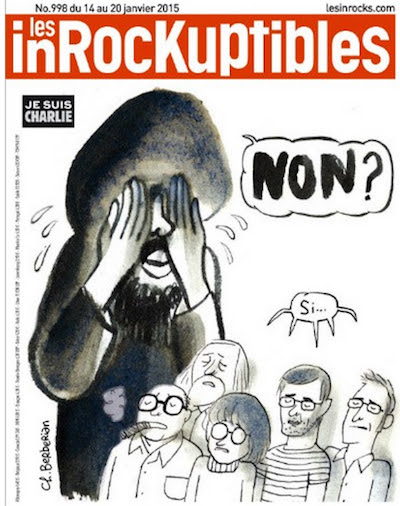 The French newspaper Charlie Hebdo published a new edition today, just a week after Islamic extremists killed twelve people at its editorial offices in Paris. The murders led to international condemnations of religious terrorism, and a collective commitment to freedom of expression. French President Francois Hollande led over a million people in Paris on Sunday, marching in solidarity with Charlie Hebdo and the victims of the killings.

In an act of extreme defiance and principle, today's edition features a new front-page cartoon of Mohammed, by Renald Luzier (known as Luz). The prophet is depicted weeping, as he was on Charlie Hebdo's first Mohammed cover in 2006. He is shown holding a "Je suis Charlie" banner, which has become a symbol of support for the newspaper since last week's attack. Luz also caricatured Mohammed in Liberation in 2011.

The new cover appeared yesterday in several newspapers, including The Independent in the UK, Liberation in France, Sueddeutsche Zeitung in Germany, Corriere Della Sera in Italy, The Star in Kenya, and the New York Post. The cover filled the entire front page of Germany's Die Tageszeitung yesterday, and a collage of covers fills the front page of todays Liberation. It also appears in The Citizen (South Africa) today. In Japan, The Tokyo Shimbun printed the cover yesterday and again today. Turkish newspaper Cuhmuriyet published the cover twice in today's issue.

Today's issue of Le Monde has a front-page cartoon by Jean Plantureux (known as Plantu), showing Catholic, Muslim, and Jewish men all enjoying the new Charlie Hebdo. (Plantu previously drew a Mohammed cartoon for Le Monde in 2006, after the Jyllands-Posten controversy.) This week's issue of the French magazine Les Inrockuptibles, published today, has a new Mohammed cartoon on its front page, drawn by Charles Berberian.

Charlie Hebdo's offices were firebombed in 2011, after it published the Charia Hebdo issue guest-edited by Mohammed. In 2012, it printed a caricature of Mohammed naked. In 2013, it produced a comic-strip biography of Mohammed titled La Vie De Mahomet (part 1 and part 2), with an expanded edition in 2014. Last year, it published a front-page cartoon of Mohammed being beheaded by an Islamic State terrorist.

At the beginning of the century, depictions of Mohammed were not considered problematic: the South Park episode Super Best Friends and the cartoon What Would Mohammed Drive? did not cause significant controversy. However, the publication of a dozen Mohammed caricatures by Jyllands-Posten in 2005 sparked protests around the world. After this, subsequent appearances of Mohammed in South Park (in 2006 and 2010) were censored, leading to the Everybody Draw Mohammed Day! campaign.