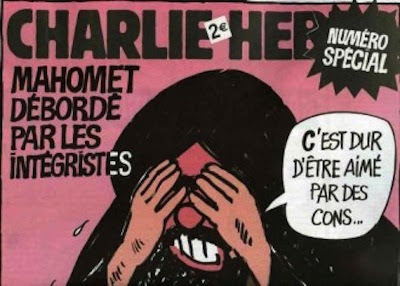 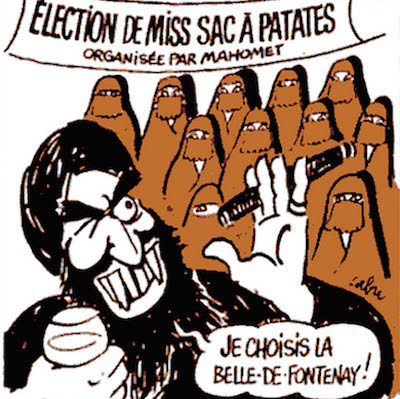 Charlie Hebdo, the French satirical newspaper, is currently being sued by the Grand Mosque of Paris and the Union of French Islamic Organisations. Its 'crime' was to print a special issue in support of the Jyllands-Posten Mohammed caricatures yesterday, and to create a new one on the front page (featuring a sobbing Mohammed, sad that he is "loved by idiots").

The cover image is by Jean Cabut, known as Cabu. On the back page, Mohammed is represented as a skull (rather tastelessly) and, in a pastiche of Rene Magritte by Loic Schvartz, as a pipe. Inside is caricature of a laughing Mohammed by Georges Wolinski. A cartoon by Philippe Honore depicts Mohammed as a series of objects, as Weekendavisen did last year. Laurent Sourisseau, known as Riss, portrays Mohammed as a president. Bernhard Verlac, known as Tignous, has recreated Jyllands-Posten's most infamous cartoon, of Mohammed with a bomb in his turban.

A previous Charlie Hebdo cartoon of Mohammed, from the 27 November 2002 issue, did not cause any particular controversy. The cartoon, by Cabu, featured Mohammed as the judge of a beauty contest.
Tags: censorship, media
continued...