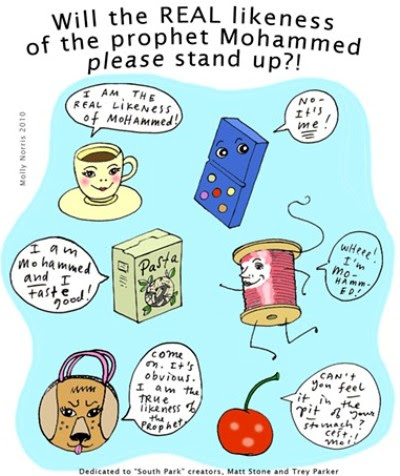 It all started last month with a spoof poster by cartoonist Molly Norris, titled Everybody Draw Mohammed Day! and featuring caricatures of Mohammed resembling domestic objects: a cup and saucer, a domino, a box of pasta, a cotton reel, a handbag, and a cherry. (Her concept that any object can be a Mohammed caricature was also used by the Danish newspaper Weekendavisen in 2005, when it labelled a series of unconnected artworks as Mohammed portraits, in response to the controversy surrounding the Jyllands-Posten Mohammed cartoons.)

Norris dedicated her poster to the creators of South Park, after Mohammed was censored from two recent episodes. When her poster was circulated on the internet, inspiring thousands of online Mohammed caricatures, Norris insisted that she had not intended for people to take the poster literally.

This month, students at three American universities (Ilinois, Northwestern, and Wisconsin-Madison) reacted to her u-turn by drawing stick-figure pictures of Mohammed in chalk. The chalk drawings were perhaps also inspired by the stick-figure Mohammed in South Park; also, just as a South Park character asked "Is that okay?", one of the chalk figures was captioned "is this okay?".

Zimbabwean cartoonist Zapiro drew an image of Mohammed commenting on the Norris poster, published in the Mail & Guardian newspaper this week. His drawing of a glum Mohammed complaining about over-reacting Muslims is similar to a front-cover cartoon published by Charlie Hebdo in 2006. (Zapiro also caused controversy when he depicted Jacob Zuma as a rapist in the Sunday Times last year.)