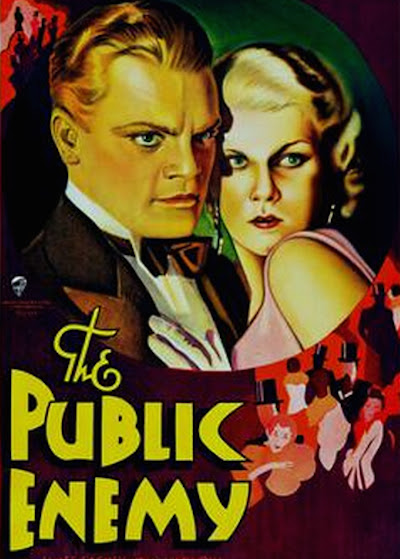 The Public Enemy, directed by William Wellman, is one of the greatest and most influential of the early gangster films. It was released only a few months after Little Caesar, though it has aged much better than that earlier film.

The public enemy of the title is Tom Powers, played by James Cagney in his breakthrough performance. The film established Cagney as the archetypal gangster star, and as the most electrifying actor of the 1930s. The intensity of his performance is startling even now. He would later star in Angels With Dirty Faces, The Roaring Twenties, and the pinnacle of the gangster genre, White Heat.

The film begins with the childhoods of Tom Powers and his friend Matt Doyle, as they graduate from petty theft to organised crime; GoodFellas and The Departed begin with similar flashback sequences. One scene, in which Powers robs a gun shop using one of the shopkeeper's own guns, was imitated in The Good, The Bad, & The Ugly. The film's most famous moment, though, is when Powers shoves half a grapefruit into his girlfriend's face, an act that's been parodied many times since (for example, in Some Like It Hot).

Little Caesar and The Public Enemy, both released by Warner Bros., initiated a cycle of gangster films and confirmed social realism as the predominant Warner studio style. The gangster film was one of several cycles that began in the 1930s: horror (Dracula and Frankenstein), musical (42nd Street), western (Stagecoach), and comedy (It Happened One Night) genres were all re-established for the sound era. (Thomas Schatz discusses this in his book Hollywood Genres.)

The Public Enemy was a pre-Code film, and not subject to the strict censorship imposed by the Hays Code in 1934. The film's attitude to sex is therefore surprisingly frank: unmarried couples are seen sharing hotel rooms, which was deemed unacceptable by the censors just a few years later. The film's final scene is also utterly uncompromising, a bleak and powerful ending that would be considered shocking even today.
Categories: films
continued...