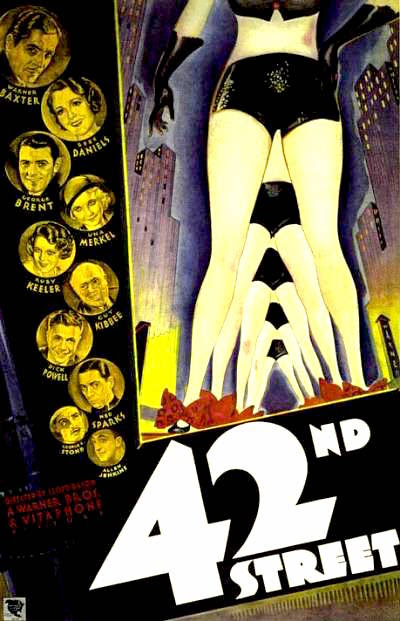 42nd Street, directed by Lloyd Bacon, was the first of a series of Warner musicals choreographed by Busby Berkeley. The characters - a tormented director, an amorous financier, a plucky ingenue - became cliches in later musicals, though it was 42nd Street that initially established them. The plot, in which tense backstage preparations produce an ultimately triumphant show - also became a genre convention. Ginger Rogers is notable in a supporting role, filmed before her partnership with Fred Astaire.

As the film takes place largely during rehearsals, many of the songs are performed without costumes or sets. The final three production numbers, however, are much more lavish, with Young & Healthy featuring the first use of Berkeley's kaleidoscopic choreography. Berkeley arranged the chorus dancers on a three-tiered revolving circular platform, and filmed them from directly overhead to create geometric abstractions from their synchronised movements. He developed this technique in subsequent Warner musicals such as Footlight Parade (also directed by Bacon) and Gold Diggers Of 1933, both released shortly after 42nd Street.
Categories: films
continued...