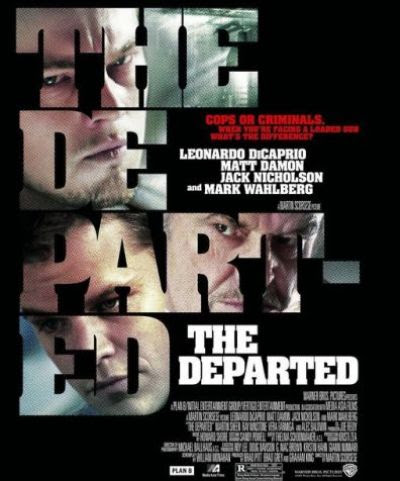 Scorsese has directed some of the most acclaimed (Taxi Driver and Raging Bull), and most controversial (The Last Temptation Of Christ) films of the past thirty years. He is primarily associated with gangster films such as Mean Streets, GoodFellas, and Casino. His Hollywood biopic The Aviator was unusually glamorous for a Scorsese film, though The Departed takes him back to gritty crime territory.

There are parallels with GoodFellas - both films begin with a young boy initiated into gangsterhood, then cut to him as a man (Ray Liotta in GoodFellas, and Matt Damon in The Departed). There are also references to the classic Warner gangster film Scarface, with an 'X' appearing as a backdrop whenever a character dies. The Third Man is also referenced, by the shadows on the wall as Costigan is chasing Sullivan and when Sullivan's girlfriend walks past him after a funeral.

The Departed is DiCaprio's third Scorsese film, after Gangs Of New York and The Aviator. This is his best performance for Scorsese thus far, certainly better than his cherubic, unconvincing role as Howard Hughes in The Aviator. In The Departed, DiCaprio's character has the widest emotional range, from psycho violence to paranoia to vulnerability, all of which he pulls off successfully. In contrast, Damon's character is simply required to look smug most of the time.

Scorsese was apparently happy to indulge Nicholson's wild improvisations. So, Costello grins that trademark Nicholson grin and takes coke by the handful. (Nicholson's most famous addition, a rubber prosthesis, was censored in Thai cinema prints.) This performance, in which, at one point, he is up to his elbows in blood, is the direct opposite of About Schmidt.