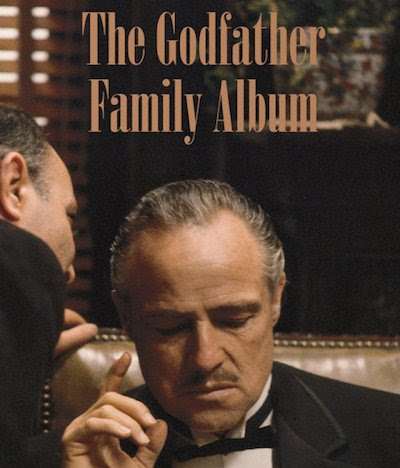 The Godfather Family Album, published by Taschen, features photographs taken by Steve Schapiro on the sets of Francis Coppola's Godfather trilogy. The format is similar to Schapiro's Taxi Driver book, with hundreds of photographs accompanied by reprints of old magazine articles about the making of the films. It was first published in a limited edition, though it's now available as a standard hardback.

Schapiro's "two most memorable images" from The Godfather - Marlon Brando holding a cat, and Salvatore Corsitto whispering into Brando's ear - are both included, though the most remarkable photos are a series of candid shots of Brando in the make-up chair, his face being manipulated by two make-up artists. The book was edited by Paul Duncan, who has edited many other film books for Taschen, including Cinema Now, Art Cinema, Horror Cinema, Film Noir, Stanley Kubrick: Visual Poet, Alfred Hitchcock: Architect Of Anxiety, and Taxi Driver.